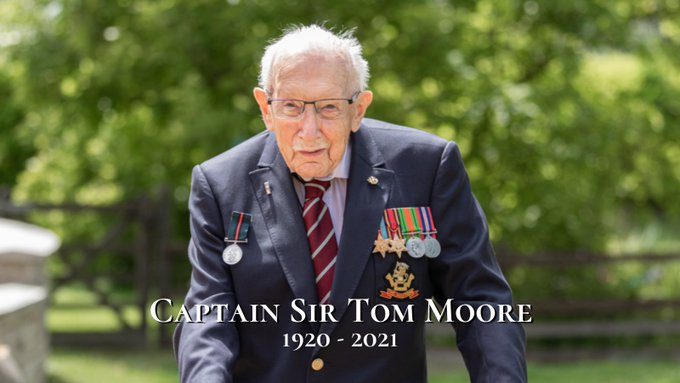 The war veteran and fundraising hero Captain Sir Tom Moore has died aged 100 after being admitted to hospital with coronavirus.

He raised more than £33 million for the NHS by walking 100 laps of his garden before his milestone birthday last year.

His optimistic tone and belief ‘Tomorrow will be a good day’ endeared him to fans around the world, from young to old.

Today it was announced he had passed away peacefully in hospital, with his devoted family by his side.

On Sunday his daughter, Hannah had revealed he had been battling pneumonia over the ‘past few weeks’ before also testing positive for Covid-19 a week ago.

The former serviceman – who was knighted in July – was then taken to Bedford Hospital in Bedfordshire on Sunday night after requiring ‘help with his breathing’, but was not put into intensive care.

Captain Tom had not been able to have the coronavirus vaccine because of pneumonia.