SELIN Cemal, originally Turkish Cyprus, born and raised in the UK, is a candidate to mark the future of England women’s football.

Selin Cemal, now a 13-year-old young and talented footballer, plays for Chelsea U14’s, known as one of the most successful clubs in the World and the UK.

The young talented footballer spoke to Londra Gazete in regards to her experiences and ambitions for her future.

Selin Cemal stated that her interest in football began due her older brother, “My interest in football started thanks to my brother, he was playing at a football Academy and I use to watch every game with my father. Watching my brother made me love football also that’s when I decided that I wanted to play football. With the support of my family, I started playing football and then I was selected for Arsenal football team U9’s. This was very important for me because Arsenal is one of the biggest teams in London, my selection fort his team motivated me and I constantly trained a lot to play better.”

FOOTBALL IS NOT ONLY A MANS GAME

Selin Cemal, who was called to Chelsea football team after Arsenal, noted that playing football has many benefits for her at a young age but also many difficulties too. In response to the question of what kind of difficulties she has experienced in football so far, she said: “Many of our matches were against the boy’s Academy, these matches were difficult but it made us stronger. There is no such thing as women cannot play football, football is not only a men’s game, it is about talent and hard work.”

MY FAMILY PLAYS A BIG ROLE

The talented player, trying to balance her education and football life with an intense tempo, used the following expressions: “I love football, it completes my life, but at the same time my studies are very important to me, I try to manage both at the same time. Of course, it is sometimes difficult but there will be difficulties to succeed. From a young age, I’ve set myself some goals, my family plays a big role in my life. With the support of my family, I’m chasing my dreams.

Selin Cemal concludes her words: “I will continue to follow my dreams, I want to complete my education and become an interior designer. My goal in football is to go up to the A-team after the Academy and play in the national team. I want to be the first Turkish Cypriot in England women’s national football team.” 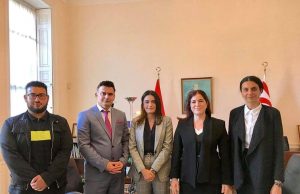