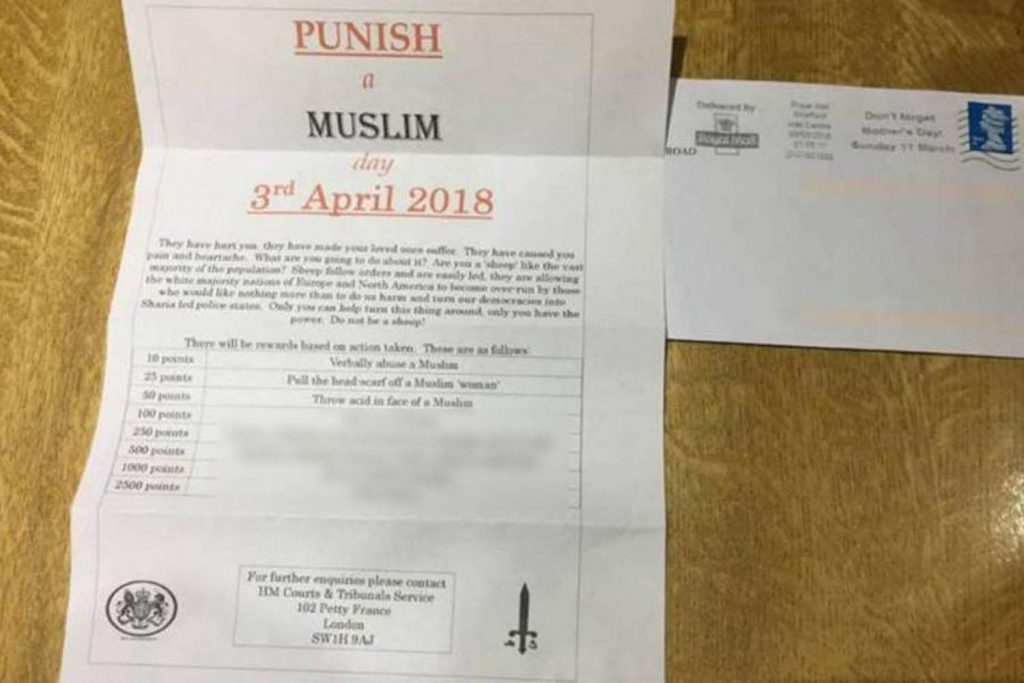 White supremacist, 36, who sparked fear in UK with ‘Punish a Muslim day’ leaflets wrote to US mass murderer behind Charleston massacre to thank him for ‘opening his eyes’

A white supremacist who produced a leaflet titled ‘Punish a Muslim Day’ wrote to an American mass murderer thanking him for opening his eyes, a court heard today.

David Parnham, 36, of Lincoln, also sent hundreds of hate-filled letters to the Queen and Theresa May over a two-year period between June 2016 and his arrest last June.

Parnham penned a note of admiration to US white supremacist to Dylann Roof who shot dead nine black parishioners in South Carolina in 2016, the Old Bailey heard.

Diana Wilson, prosecuting, read passages from the letter, which had Parnham’s DNA on it. It said: ‘I just wanted to thank you for opening my eyes.

‘Ever since you carried out what I call the cleansing I felt different about racial difference. I hate these animals with a passion. 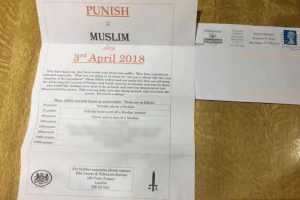 ‘I sent letters with white powder to mosques, they had to shut down Parliament because of it. This just reflects how much I respond you.

‘I wish I had been there at the cleansing I would have done anything. I would like to kill, it’s more of a sexual thing. The idea of killing turns me on.’

Parnham claimed in the letter to have tried to kill a friend by putting bleach in their drink.

‘I put bleach in a friend’s drink, all good fun’, he wrote. ‘Anyway, if they give you the death penalty I will have to do something.’

In March 2017 a series of letters – known as the ‘Five Knights’ series – were sent to addresses around the University of Sheffield campus asking the recipients to commit exterminations of ‘Jews, p**is, n*****s, gypsies and Mexicans.’

In July and August 2017 the ‘Great Cleanse’ series of letters were sent to mosques across London containing white powder and various threats.

His so called ‘Punish a Muslim Day’ was due to take place on April 3 last year but the date passed without incident.

Parnham then released a sequel series, ‘Punish a Muslim 2’ up until June last year.

Ms Wilson said: ‘His Facebook was also linked to the playing of an ethnic cleansing game.’

Parmham gave a no comment interview to police. Some of Parnham’s letters were received while others were intercepted by police.

Dr Zara Johnson Elsheikh, chair of the Counter-Terrorism Advisory Group, said in a statement read to the court: ‘Genuine fear and paranoia was spread across Muslim communities.

‘The relative brevity of national media coverage also helped to generate fear. There was a sense of fear and that Islamophobia would be permitted.’

Dr Johnson Elsheikh said that the period of panic extended through the 2017 Easter period.

‘A number of parents and grandparents cancelled travel plans in order to stay at home and protect loved ones’, she said.

Parnham has admitted five counts of hoaxes involving noxious substances, seven counts of sending letters with intent to cause distress, one count of soliciting murder, one of bomb hoaxes and one of encouraging offences.