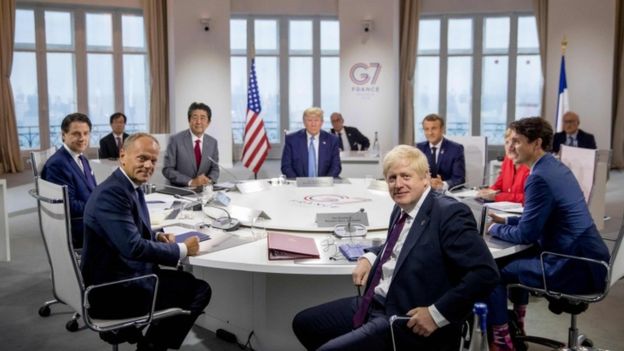 President Trump has promised a “very big trade deal” with the UK, saying its departure from the EU will be like losing “an anchor round the ankle”.

Mr Trump was speaking after a breakfast meeting with Mr Johnson at the G7 summit in Biarritz in France.

But Mr Johnson said the US must open up its markets if a post-Brexit trade deal is to be agreed.

“I don’t think we sell a single joint of British lamb in the United States, we don’t sell any beef,” the PM said.

Mr Johnson’s breakfast meeting came before a day of discussions with other world leaders at the summit.

The PM is also meeting European Council President Donald Tusk, a day after the two men clashed over who would be held responsible for a no-deal Brexit.

Speaking to reporters after the working breakfast, Mr Trump said a deal with the UK would happen “quickly”.

“We’re going to do a very big trade deal, bigger than we’ve ever had with the UK,” he said.

Mr Johnson told Mr Trump: “Talking of the anchor, Donald, what we want is for our ships to take freight, say, from New York to Boston, which for the moment they’re not able to do.”

In a later interview with the BBC, Mr Johnson said agreeing any trade deals with the US within a year “would be tight”.

“My own experience of the way Americans work, the size and complexity of the deal we want to do probably means we won’t be able to do within a year.

When asked if it could take five years, he replied: “No, we’ll do it faster than that.

“We need to do it fast, but to get the whole thing done from soup to nuts within a year is going to be a big ask.”

Before his talks with the US President, Mr Johnson spoke about “massive opportunities for the UK to prise open the American market”.

As a member of the European Union, the UK cannot make its own trade deals with other countries – and the EU does not have a free trade deal with the US.

The UK has already agreed 13 “continuity” deals with 38 countries that will apply post-Brexit.

Offering an example of an American trade restriction, Mr Johnson said: “Melton Mowbray pork pies, which are sold in Thailand and in Iceland, are currently unable to enter the US market because of, I don’t know, some sort of food and drug administration restriction.”

He continued: “UK bell peppers cannot get into the US market at all.

“Wine shipments are heavily restricted. If you want to export wine made in England to the US you have to go through a US distributor.

The government added that tariffs on some UK goods in the US can reach up to 28% for fashion, 15% for machinery and 35% for food and drink.

David Henig, the UK director of the European Centre For International Political Economy, said the US “would be loathe” to get rid of the barriers intended to protect US producers.

He added: “The US is quite protectionist – the US have never done a trade deal the likes of which Mr Johnson is describing.

“The question is whether the US is prepared to give the UK something and what we would have to give them in return.

“It is less clear what Trump wants in terms of trade altogether.”

In June, Mr Trump made comments that the NHS “was on the table” in US-UK trade deal – but later rowed back on his remarks.

At the G7 summit Mr Johnson was asked if he had made it clear the NHS was not on the table.

He replied: “Not only have I made clear of that, the president has made that very, very clear. There is complete unanimity on that point.”