A-levels: Top grades drops for the first time since 2007 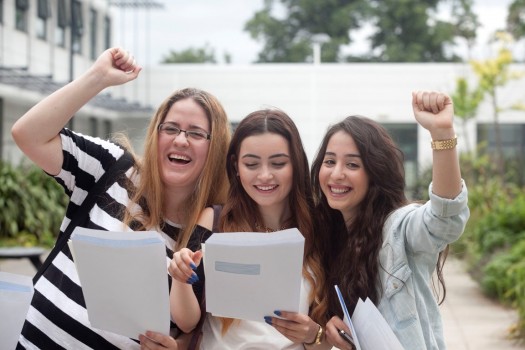 The proportion of students achieving the top grades at A-level has fallen to its lowest level for more than a decade, this year’s results show.

Girls narrowly reclaimed the lead from boys, with 25.5% achieving A* and A grades compared with 25.4% of boys.

The overall pass rate remains the same as last year at 97.6% for students in England, Wales and Northern Ireland.

The figures, released by the Joint Council for Qualifications, also show that – for the first time – the number of girls taking the three sciences has overtaken boys at 50.3% compared with 49.6%. There has been a big push to increase the take-up of sciences among girls.

Six weeks after the last A-level exams were taken, more than 300,000 18-year-olds have ended the anxious wait to learn their A-level results.

Entries to Spanish have overtaken French for the first time, making it the most popular language at A-level.

Perhaps unsurprisingly, this cohort of young people seem to have an increasing interest in politics, with entries for the A-level up by 1,765 on last year to 19,729.

They would have been making their A-level choices in 2017, after the election of Donald Trump in America and the Brexit referendum in the UK.

The Association of School and College Leaders says this is because reformed GCSE courses are “sucking the joy” out of the subject, and putting teenagers off taking it at A-level.

Universities and colleges use the results to confirm and withdraw offers of places to students.

The University and College Admissions Service (Ucas) has already said there is a slight dip in the number of students being accepted on to UK degree courses.

The total dropped 1% to 408,960, initial Ucas figures show, but the number of applicants looking for a place through clearing on Thursday morning rose slightly to 126,170.

Thousands of students who have done better or worse than expected will be seeking places on courses at universities through the clearing system run by Ucas.

It is expected to be very busy again this year with a record 638,000 18-year-olds having already applied in the UK. Ucas anticipates 70,000 students will get a place through clearing this year.

Education Secretary Gavin Williamson wished candidates good luck, urging them to be proud of their achievements.

“Of course, the minds of thousands of young people getting their results will soon turn to the next chapter in their lives, whether that’s a place at one of our world-class universities, earning on an apprenticeship or entering the world of work,” he said.

Students were told not to worry on Wednesday after the marks for each grade boundary for all subjects of the two major exam boards, Pearson/Edexcel and OCR, were leaked online.

The documents revealed that at maths A-level, which is a new, tougher specification this year, candidates had to score only just over 50%.

Schools Minister Nick Gibb said he was confident this was appropriate, because grade boundaries depended on the difficulty of the exam.

Overall in maths, the top grades fell by just 1.2% across the UK – which is slightly higher than the decline for all exams.

National Association of Head Teachers general secretary Paul Whiteman said A-level students were coping well with the reforms, and that schools and colleges had worked hard to support them.

As candidates received their results, the exam boards published details of the national picture.

Overall, A-level pass rates and the percentages reaching each grade never change very much, as exam boards and regulators seek to maintain standards over time.

They do this by making minor adjustments to grade boundaries, formulated by marrying the difficulty of papers with the predicted ability of the group of students sitting the qualifications.

In England, over the past few years, A-levels have moved away from coursework and returned to students being graded on final exams.

This was part of efforts to upgrade exams to keep up with the highest performing nations.

A mix of old-style and new exams are still being taken in Wales and Northern Ireland.

Students in Scotland received their results earlier this month, with the pass rate for Highers falling to 74.8%, compared with 76.8% last year.