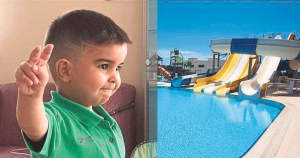 A 4-year-old boy has drowned in a swimming pool while on holiday with his family in Turkey.

The family travelled from the UK to Izmir, Turkey for their summer holiday have sadly lost their young child Başer after he drowned in the hotel they were staying at’s water park.

The incident took place last Thursday in a water park at a hotel in Izmir. Başer Arges Kaya, who just turned 4-years-old, was on holiday with his parents Sinan Kaya and his wife Gülbahar Kaya, while playing at the hotel’s water park the 4-year-old child sadly downed in the pool.

While with his parents by the poolside Başer fell in while they were unaware, within minutes he was seen at the bottom of the swimming pool which was just 1.2m deep, by the children and people in the pool. He was pulled out unconscious and medical aid was given until he was taken to hospital, despite all effects to save Başer he sadly past away.

A commemoration ceremony was also held at Alxas Community Center in London.

Tiny Başer is the second facility summer; just 2 weeks ago 27-year-old Gulbahar Aslan was on holiday in Bodrum, Turkey when she had a heart attack and fell into the hotel’s swimming pool.