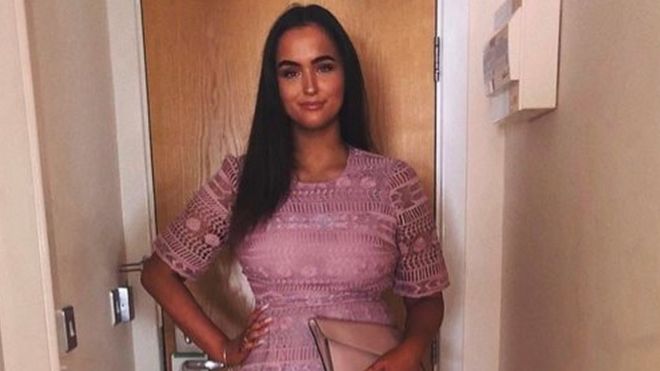 A student who was told by a Tinder match that a dress she was wearing looked “awful” is now modelling the outfit on Asos.

Thea Lauryn Chippendale, 20, received a message from a man who described the outfit as a “charity shop job”.

The dress is from Asos and the company is now using the very same photo to help sell the outfit on its website.

She added: “I’ve had to pinch myself quite a few times to believe it’s real. I’m still so shocked and amazed that they’ve put a picture of me on their website.

Thea, from Lincoln, posted a tweet – showing the messages she’d received from a man called George – on 28 April.

Her Tinder match had sent her a message saying: “That dress in the last photo is not doing any favours. Hope that helps.”

When Thea asked why he felt he needed to comment on her appearance, he replied: “Literally had to tell you else I wouldn’t have slept.

“It’s awful you not reckon? Charity shop job! I tell you what… grow up! And shop somewhere decent.”

Thea said she uploaded the messages to Twitter because she wanted to “expose the sort of things that happen with women and men on Tinder”.

Her tweet went viral – with more than 98,000 likes and 7,000 retweets – and she received loads of messages of support.

Men are trash. (Included the pic he’s on about 🙃) pic.twitter.com/3pi6NHl0Oy

She told Newsbeat: “I’m absolutely blown away by mainly how positive the reaction has been.

“People have just been really positive and really nice about me about the way I dress.”

Thea said she then got a message from Asos asking whether she’d like to be on the product page for the dress.

On Thursday, the fashion website tweeted her to show it was using her photo in the image gallery on the page where the outfit was being sold.

The student said she “didn’t think it would actually happen” so was really shocked when she saw her photo.

People on Twitter have said Thea deserves to be a model for Asos and her photo has made them want to buy the dress.

Thea said: “I am still very in a state of shock this is all happening, purely from someone just being horrible to me.