ÇINAR Ergin, the Consul General of Turkey in London, evaluated 2017 and talked about the plans for 2018. 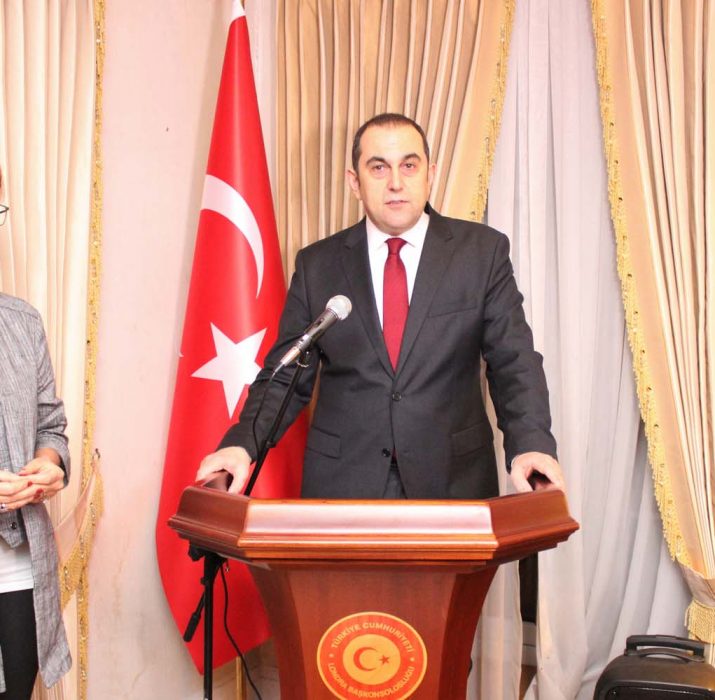 ÇINAR Ergin, the Consul General of Turkey in London, evaluated 2017  and talked about the plans for 2018. With members of the public, press and non-governmental in attendance, Ergin referring to their being one of the oldest and most important consulates of Turkey saying “The first Consul General Sadullah Ferit Bey started his duty on December 27, 1923. When I later looked at the file, I saw that I was the 32nd Consul general of London. As you know, I started my assignment on 15 February this year. ”

APPOINTMENTS EASIER THAN EVER

Expressing that they performed more than 2,000 transactions at consulate every month on average, Ergin stated that the renewed appointment system can be used more easily and said:

“This makes the Consulate General of the Republic of Turkey one of the five most busiest consuls in the world. We estimate that the number of our citizens in our task zone is around 400 to 500 thousand. I’m guessing this because the actual figure is not clear. The number of citizens in our records still has not reached 200. It still stands at 199 thousand. ”

THE CONSULATE IS YOUR HOME

“Our citizens only apply to the consulate when there is a certain process. Or they are afraid to come because of various reasons. But the consulate is their home. The consulate is not just a place where official processing is done, but the first institution that can have them here. ”

Ergin spoke of an issue raise to him by many, the citizens who wanted to send the funeral to Turkey are met with very high costs and asked for a solution for this issue. Consul General Ergin stated that they knew that they had been paying serious amounts of money in this regard, that some of the previous studies had started this, but unfortunately it was not only a social subject, but also a commercial subject. There are point that need address and he said that they will definitely be focusing on this issue next year.

“We are aware that British lands are not just London. We know that many of our citizens are having a hard time travelling here. Although we have a consulate in Edinburgh, mobile consular service is an important issue. There has been talk of this subject before.This issue will definitely be evaluated in our next program. “