The PM also refuses to say whether she would back Leave in a second referendum, saying she will not answer hypothetical questions. 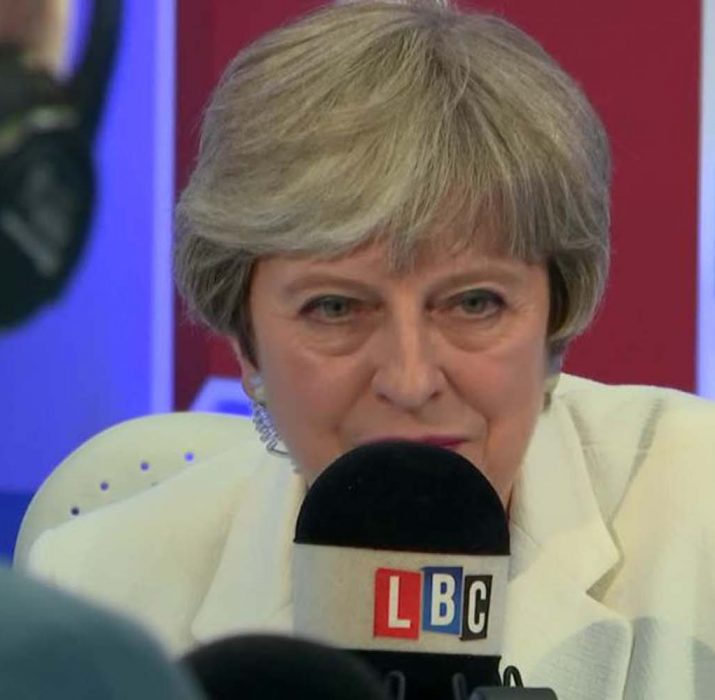 The PM also refuses to say whether she would back Leave in a second referendum, saying she will not answer hypothetical questions.

Theresa May has admitted “we don’t know what’s going to happen” to EU nationals living in the UK if Brexit negotiators fail to reach a deal.

The Prime Minister said she wanted “EU citizens to be able to stay” but that question marks over the future of their status were “one of the reasons why we want to get a deal”.

She has repeatedly claimed “no deal is better than a bad deal” and her comments come a day after the Government published two white papers on the impact of a ‘no-deal’ scenario on customs and trade.

Mrs May was tackled in a phone-in on LBC by EU citizen Nina, who pressed her on the fate of three million others’ residency rights.

“We have teams of people working on every possible outcome,” Mrs May said.

“You would expect the Government to prepare – because we don’t know what’s going to happen.

“By definition, if there isn’t a deal then we won’t have been able to agree with the EU what happens to UK citizens current living in places like Spain and Italy and other member states.”

She insisted an agreement on EU citizens’ rights was “very close”.

But pressed further, Mrs May appeared to concede for the first time that EU citizens were safe in the UK whatever the outcome of negotiations

“We’re not going to be throwing EU citizens who are currently here in the UK, out of the UK,” she said.

Labour leader Jeremy Corbyn branded the exchange “unacceptable”, while Labour MP and former education minister Tulip Siddiq called it “disgraceful”.Mrs May also refused to say whether she would back Brexit in a second referendum.

“I’d look at everything and make a judgement, and I’d do exactly the same thing this time round but we’re not having another referendum,” she said.

The Prime Minister also said she needed a “stiff drink” after her problem-plagued conference speech in Manchester.

And she appeared to land a subtle blow on George Osborne, the chancellor she sacked last year.

“George has chosen to adopt a new career as editor of the Evening Standard and obviously we believe in a free press,” she said.

Asked about comments Mr Osborne wanted her “chopped up in bags in my freezer”, she recycled a previous quip: “Quite a few people in my career have called me an ice maiden but I think he took it a bit far.” (SKYNEWS)