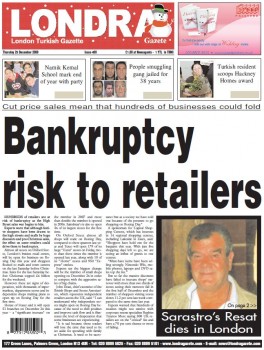 HUNDREDS of retailers are at risk of bankruptcy as the High Street sales war begins to bite.

Experts warn that although festive shoppers have been drawn to the high streets and malls by huge discounts and pre-Christmas sales, the effect on some retailers could drive them to ban­kruptcy.

However there are signs of desperation, with thousands of supermarkets, department stores and independent shops making plans to open up on Boxing Day for the first time.

House of Fraser said it will open 51 branches on December 26 this year – a “significant increase” on the number in 2007 and more than double the number it opened in 2006. Sainsbury’s is also to open 36 of its largest stores for the first time.

On Oxford Street almost all shops will trade on Boxing Day, compared to three quarters last year and Tesco will open 179 of its large “Extra” stores on Friday, more than three times the number it opened last year, along with 10 of its “Home” stores and 950 “Express” outlets.

Experts say the biggest change will be the number of small shops opening on December 26 in order to compete with the aggressive sales of big chains.

John Dean, chief executive of the British Shops and Stores Association, which represents independent retailers across the UK, said: “I can understand why independent stores might open on Boxing Day because of the need to shift product and improve cash flow and it illustrates the level of desperation that some businesses are experiencing.

“It is sad because those traders will lose the time that used to be set aside for spending with family at Christmas. It used to be sacrosanct but as a society we have sold out because of the pressure to go shopping on Boxing Day.”

A spokesman for Capital Shopping Centres, which has interests in 14 regional shopping centres, including Lakeside in Essex, said: “Shoppers have held out for the bargains this year. With just five shopping days left to go, we are seeing an influx of guests to our centres.

But so far the massive discounts have failed to increase shops’ turnover with more than two thirds of stores seeing their turnover fall in the first half of December and the number of shoppers visiting stores down 11.2 per cent last week compared to the same time last year.

Experts warned that hundreds of retailers might not survive with corporate rescue specialists Begbies Traynor More saying 300 UK retailers are on the “critical” list and have a 70 per cent chance or more of failing.

Republished on 25 December 2013 as part of Londra Gazete’s “Five years ago this week” feature.