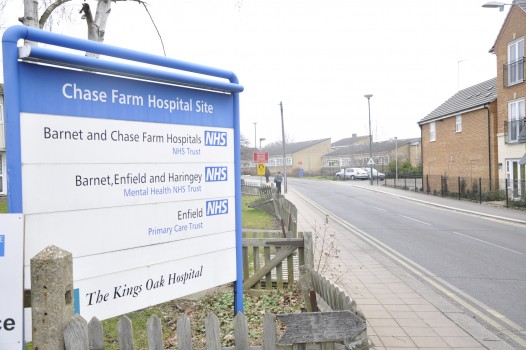 Chase Farm Hospital, where the A&E and maternity units are to close

ENFIELD Council has lost the legal battle to prevent the closure of maternity and A&E units in Chase Farm Hospital. After the High Court’s decision to confirm the closure of the units, it is expected that the move will be made on 9 December.

Residents and politicians alike were divided by the decision regarding Chase Farm Hospital, one of Enfield’s most used hospitals in the Turkish-speaking communities. Cllr Doug Taylor, the leader of Enfield Council, said that the verdict to go ahead with the part closure before improving the overall capacity of healthcare services in the area was very disappointing.

Meanwhile NHS Barnet, Enfield and Haringey Clinical Strategy Group, which had supported the decision for the downsizing, said the High Court’s verdict had affirmed their decision was right from the beginning.

Enfield North MP Nick de Bois had supported the council and stood against the downsizing of Chase Farm. Mr de Bois has not removed his support for the Council, even after the verdict of the High Court.

On the other hand, Southgate MP David Burrowes, who had criticised the Labour government back when it had initiated the closure procedures, did not support Enfield Council in its legal action. He had claimed that the closure would be confirmed and that the council was wasting tax-payers’ money.

The plans to close the maternity and A&E units in Chase Farm included the transfer of these services to North Middlesex and Barnet Hospitals. Despite worries that the strain on the already struggling hospitals will intensify with this transfer, the Strategy Group have said that necessary preparations have been made in the two hospitals. However, this claim has been disputed by the council.

Mr de Bois made a statement on Twitter clarifying his position regarding the issue:

“The decision by the High Court is very disappointing. I believe Enfield Council had a good case and made the right decision in seeking a judicial review, and residents in the borough supported it too.

“I think we can be proud of the cross-party and borough wide campaign fought locally to try and save Chase Farm, and we need to continue to put party-politics aside as we begin a new fight to get the best possible healthcare services for the people of Enfield.”

He told Londra Gazete: “I have held many meetings and challenged the decision of the health authorities in Parliament on many occasions with both the Secretary of State for Health, the leader of the House and of course the Prime minister. I have never hesitated in criticising the decision to downgrade the A&E and maternity units to either the last Labour government who authorised the downgrade in 2008 or this government who re-confirmed the decision in 2011.”

Aylin Cazimoğlu, Member of Enfield Council and the Chair of the Health Panel, has also been disappointed by the High Court’s decision.

In her words to Londra Gazete: “Monday was a sad sad day for the people of Enfield. As a council and as a resident I am very disappointed. This was not what the residents of Enfield wanted. As chair of the health panel in Enfield, I can say that the view of the panel is that this loss of service will have a negative effect on patient care.

It is still not too late for the government to stop the closure. However, they are disingenuous. The Secretary of State has responsibility for NHS, he can step in and stop this downsizing. The Council of Lewisham for example has taken the Health Secretary to Court and forced him to intervene against downsizing of Lewisham Hospital.”

Regarding further action, Cllr Cazimoğlu said that “The Council must consider the legal advice regarding further action. At this point, continuing with legal action would be too complex and costly.  The Council must be sensible with tax payers money. Appealing to the High Court was not a waste of tax payers money.  Our residents were very clear about the council doing everything they could to stop the downgrade.”

Furthermore, Cllr Cazimoğlu is not confident that there is enough capacity in the health services of the area to handle to repercussions of the downsizing; “Local hospitals are already missing their targets, both for A&E and for normal operations. North Middlesex Hospital has not met its target for weeks and patients are kept waiting for longer than 4 hours in Barnet Hospital. I know there were shortages of A&E consultants, problems in transport and efforts to recruit new nurses.”

Cllr Cazimoğlu also drew attention to the failed promises of the government; “The government had promised more ambulances to the area, to compensate for the longer distance many patients will have to travel to reach the other two hospitals. Enfield has not received more ambulance nor more para-medics. David Cameron was against this downsizing under the Labour government, and the Secretary of State had promised this closure would not happen without the necessary preparations. We see that both of these promises are not kept.  They have also broken their promise to deliver more GPs to Enfield, while some areas like Enfield Lock have 50% of their population not registered with a GP.”