Edmonton MP Andy Love has announced he is stepping down, prompting a race for his safe Labour seat barely four months before the election. 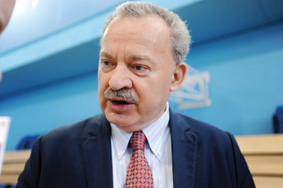 Edmonton MP Andy Love, who is stepping down after 18 years

Edmonton MP Andy Love has announced he is stepping down, prompting a race for his safe Labour seat barely four months before the election.

The North London MP announced on Twitter he was stepping down “after much consideration and 18 years representing Edmonton”.

“I’m sad of course but I think it’s the right & I’m sure Edmonton will have a great new MP,” he told one early well-wisher on the social networking site.

Mr Love was one of the winning MPs who entered the Commons in Tony Blair’s landslide election victory of 1997, becoming the first Labour MP for Edmonton in fourteen years. He had challenged for the constituency five years previously but lost by just 593 votes to the Conservative Ian Twinn.

His announcement on Monday evening triggered a flurry of speculation over who will succeed him in what is now considered a strongly Labour seat.

Andy Love announced he was stepping down on Twitter

One of the most prominent candidates to declare for the Labour nomination was İbrahim Doğuş, director of the Centre for Turkey Studies think tank who narrowly lost his party’s nomination in nearby Enfield Southgate.

In a message on his campaign website, he wrote: “I got involved in our Labour Party when I was 19, and in the 14 years that followed I have campaigned throughout London for us in every election and throughout the year. I believe I have the ideas, the plans and the experience to win Edmonton for Labour.”

If elected, he would become the first Turkish-speaking Member of Parliament in the UK.

However, Mr Doğuş faces a number of potential challengers for the seat. Among those already reported to have declared is Joseph Ejofor, a Haringey Council councillor for Bruce Grove, who said he believed his “local knowledge” can help him. On Monday night he also declared he was seeking the nomination.

The London Assembly member for Enfield and Haringey, Joanne McCartney, is another strong contender but has not yet declared her interest.

Meanwhile the Conservative Party has long selected its candidate: Gönül Daniels, known to some in the Turkish-speaking communities, will be looking to win Edmonton back to her party for the first time since 1997.

She will be challenged by Neville Watson, the UK Independence Party candidate, and Green candidate Douglas Coker.