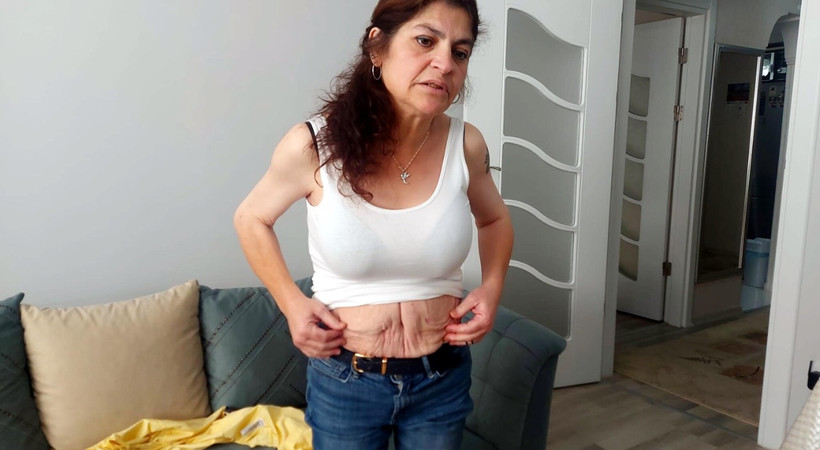 A 50-year-old translator living in London Selda Gümüş, decided in 2015 she was going to have a gastric band sugary after suffering from weight issues all her life; after the domestic weight loss she was left with excess skin which she wanted to have removed.

After doing her research she picked Prof. Dr. E.C. to have the surgery done in Turkey Izmir, having the first operation on May 8, 2018, Gümüş went under the knife for the second time on July 29, 2019, and for the third time on August 4 2020.

Claiming that the sagging skin from her body was not removed during this period, in addition to this, surgical scars were formed, Gümüş, said she was told by Prof. Dr. E.C. that he was too busy for revision operations, said She filed a criminal complaint against the prosecutor’s office.

Gümüş, explained that she did not have any physical pain, but that she felt very bad psychologically because of her appearance, said, “The purpose of aesthetics; to beautify the existing. However, I don’t think I’ve been made beautiful, I think I’ve been made much worse. I feel like my body was made up for a horror movie scene. I am losing sleep because I am going through this process. Doctor, I’m having nightmares. In my dreams the doctor gouges out my eyes or chops me to pieces. When I expressed that I wanted a revision, he kept me busy by saying “Your skin is sensitive, you are important to us, you are like a member of the family”. But I no longer have the strength to hold on.” Gümüş’s lawyer, Ülkü Aybüke Eroğul, stated that they filed a criminal complaint with the prosecutor’s office and said, “The judiciary will decide from now on, but we think that my client’s victimization is quite clear.”

Prof. Dr. E.C. lawyers said “… All surgeries requested by the patient in 3 different sessions were successfully performed within the scope of legality conditions of medical intervention. There were no risks, complications or loss of function in the patient.” Adding that Gümüş has a number of complicated issues with her health that made her “not suitable for surgery under these conditions” add once she was fully recovered “he could only perform this operation after the patient’s recovery, and that he would not be charged a fee.”