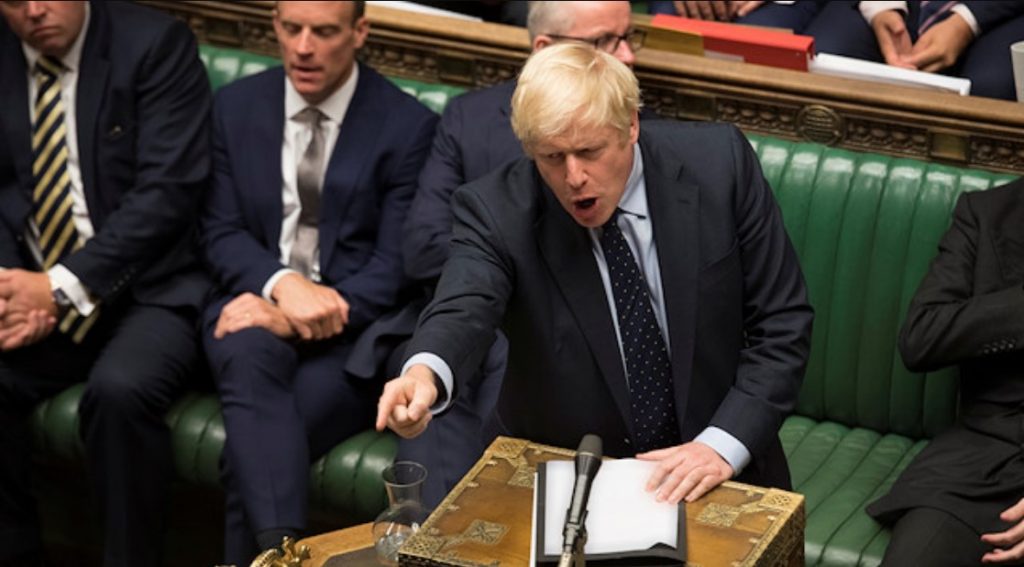 The government will abandon its Brexit bill if MPs vote down its three-day timetable to get it through Parliament.

Boris Johnson told MPs if the programme was rejected and the EU confirmed a delay to the 31 October exit, he would instead push for a general election.

The PM said Parliament had been “caught in a deadlock of its own making”, and he would “in no way allow months more of this”.

But opposition MPs called the threat to pull the bill “childish blackmail”.

The Withdrawal Agreement Bill was published on Monday night and MPs are now debating it in the Commons.

They will vote at around 19:00 BST on the proposed timetable.

Boris Johnson agreed his new plan with EU leaders last week, but has repeatedly pledged to leave the EU by the end of October, with or without a deal.

Opening the debate in the Commons, Mr Johnson told MPs that giving the deal – and the programme motion – their backing would “get Brexit done and move our country on”.

But he added: “If Parliament refuses to allow Brexit to happen, and instead gets its way and decides to delay everything until January or possibly longer, in no circumstances can the government continue with this.”

Mr Johnson did not say what the government would do if the EU offered a shorter extension.

However, he said MPs’ constituents would “not be fooled by any further delay” and “would not understand why it was necessary”.

The law requires 25 days between an election being triggered in Parliament and polling day – meaning were one to be called this week, the earliest it could take place would be Thursday, 28 November.

Labour leader Jeremy Corbyn said his party would vote against the timetable, calling it “an abuse of Parliament and a disgraceful attempt to dodge accountability, scrutiny and any kind of proper debate”.

European Council President Donald Tusk told the European Parliament in Strasbourg on Tuesday he was consulting the 27 EU leaders on how to react to the UK’s request for a Brexit delay and “will decide in the coming days”.

“I have no doubt that we should treat the British request for extension in all seriousness,” he tweeted.

What is in the Withdrawal Agreement Bill?

The 110-page document will give legal effect to the withdrawal deal negotiated by Mr Johnson.

His plan ditches the backstop – the controversial measure designed to prevent a return to physical checks on the Irish border.

Instead it essentially draws a new customs border in the Irish Sea, as goods which could travel onwards to Ireland will have to pay a duty tax.

It also will see the whole of the UK leave the EU customs union, meaning it could strike trade deals with other countries in the future.

The WAB will also turn any agreed transition period into law, fulfil requirements on the rights of EU citizens in the UK after Brexit, and allow ministers to make “divorce payments” to the EU foreseen under the current deal.

Other areas the bill covers include:

MPs will be able to vote on amendments – changes or add-ons – to the bill.

If the government cannot get the bill through Parliament, the default legal position is for the UK to leave without a deal on 31 October, but that will change if the EU grants an extension.

Some MPs have express that they have not been given enough time to read through and study the bill in full.

Caroline Lucas tweeted that ministers had been given more time to debate the Wild Animals in Circuses Act than the Withdrawal Bill. The former leader of the Greens added: ‘It’s hard to think of anything which better illustrates this government’s contempt for people, Parliament and democracy.’ Angela Rayner, Labour’s shadow education secretary, also said Parliament must be given enough time to properly scrutinise the Bill.