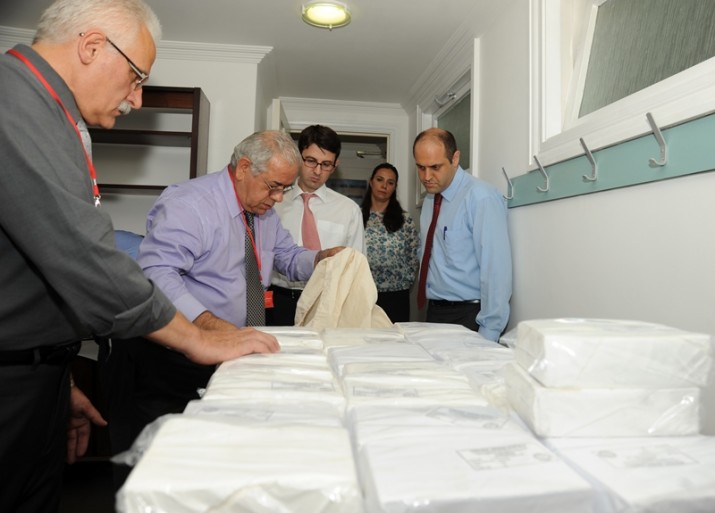 The Turkish election authorities have sent 76,000 ballot papers to London

Thousands of voting papers have been flown into London from Turkey ahead of next month’s presidential election.

The shipment of boxes, stamps and 76,000 ballot slips materials will be used on the weekend of 2-3 August, when expatriates living in the UK will be able to vote in a Turkish election for the first time.

It was received by Turkey’s Consul-General in London, Emirhan Yorulmazlar, alongside consular staff and representatives from the country’s three main political parties, the governing AK Party and opposition CHP and MHP.

The materials will be locked into a dedicated room in the Turkish Embassy despite objections from the opposition party representatives, who objected to them being stored there on the grounds that they may not be secure.

BOOK A TIME TO VOTE

Voters have until 3pm UK time on Friday 25 July to log on to the Turkish Electoral Board’s (YSK) website at www.ysk.gov.tr and book a time slot in which they will come to vote.

They can choose to vote in a morning or afternoon slot on either Saturday or Sunday.

Mr Yorulmazlar said that under YSK guidelines, voters who book a morning slot but do not arrive in time will be permitted to vote in the afternoon. However, anyone who books a Saturday slot but arrives on Sunday will not be able to cast a ballot.

Registered voters who do not book a slot until 3pm on Friday will have a time allocated to them.

The Consul-General said a bank of computers has been made available at the Consulate in Knightsbridge to help Turkish expatriates book a voting time slot.

Voting will take place at Kensington Olympia between 8am and 5pm on Saturday 2 and Sunday 3 August.

As with elections in Turkey, voters will be required to present a form of identity that contains their national identity number (TC Kimlik Numarası), such as an identity card or passport.

Mr Yorulmazlar said that staff from the Consulate will be on hand at the polling station to guide voters to the correct ballot box.

VOTING AT THE AIRPORT

Another option for anyone who will not be in Britain that weekend is to vote at the Turkish border. Registered voters travelling home for a summer holiday can cast their ballots at airports, seaports or land border crossings with neighbouring countries.

Voting at these locations begins on Saturday 26 July and will run until Sunday 10 August.

Unlike previous years, however, voters will not have to cross the border in order to vote. At airport terminals, polling stations will be reachable without having to cross airport security.