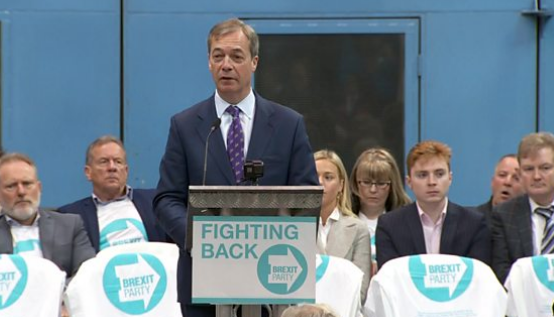 Speaking in Coventry, he said May’s expected European elections were the party’s “first step” but its “first task” was to “change politics”.

“I said that if I did come back into the political fray it would be no more Mr Nice Guy and I mean it,” he said.

But UKIP dismissed the Brexit Party as a “vehicle” for Mr Farage.

The launch comes after Prime Minister Theresa May agreed a Brexit delay to 31 October with the EU, with the option of leaving earlier if her withdrawal agreement is approved by Parliament.

This means the UK is likely to have to hold European Parliament elections on 23 May.

Mr Farage said the Brexit Party had an “impressive list” of 70 candidates for the elections. Among those revealed at the launch was Annunziata Rees-Mogg, sister of leading Conservative Brexiteer MP Jacob Rees-Mogg.

Mr Farage said: “This party is not here just to fight the European elections… this party is not just to express our anger – 23 May is the first step of the Brexit Party. We will change politics for good.”

He said he was “angry, but this is not a negative emotion, this is a positive emotion”.