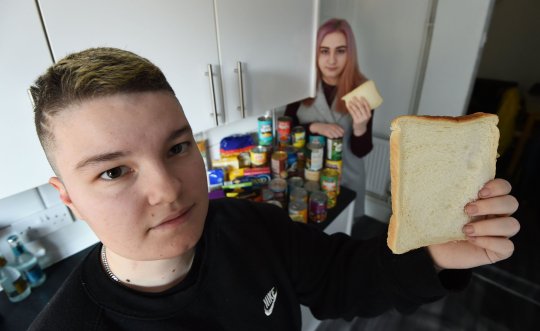 TEENAGER couple struggling on Universal Credit were overwhelmed by the donations from strangers.

Jaedyn Overbury and Lizzie Mazon both aged 18, lived on dry toast for three days because of financial struggle.

The teenager couple, which are on Universal Credit, experienced hard times when Jaedyn went on sick leave from shelf stocking at ASDA due to general anxiety disorder.

However, the £230 a month living was only enough for rent, cheap food, phone top ups and public transport for hospital appointments.

As a result, the couple asked for help online and received great responses.

A food hamper was delivered and now their couple is filled with essentials such as egges, milk, butter and cheese.

Alongside, bacon, fruit, soup, pasta , crisps and a great amount of tinned goods.

The couple said that the food provided will be enough for them up to two months and will help Lizzie to a get through a healthy pregnancy.

Jaedyn said: “I was amazed by the response we got, we didn’t expect it at all. We had food from about three people, picked up by one of the ladies and dropped to us all on the first night that we had put the post up. And then from there to yesterday we have had 4 more people drop food to us.

‘UNIVERSAL RATE IS AWFUL TO LIVE ON’

The universal rate for being signed off is awful to live on so I’m still looking for part time work, even when advised by the doctors not to be in work for the time being. I struggle quite badly with Generalised Anxiety Disorder.