CTCA (UK) is committed to serving the British Turkish Cypriot community and as a highly-respected organisation of elected volunteers it works relentlessly to pursue the interests of this group and its associations. 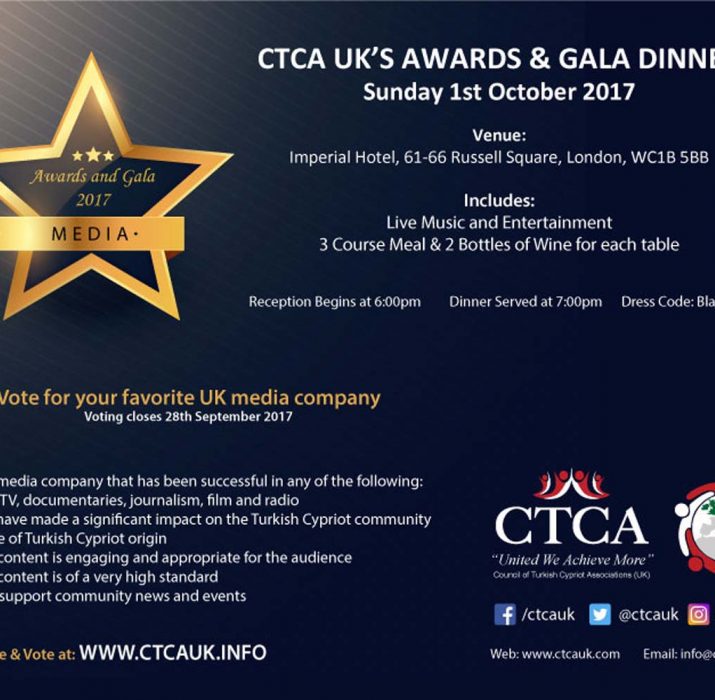 CTCA (UK) is committed to serving the British Turkish Cypriot community and as a highly-respected organisation of elected volunteers it works relentlessly to pursue the interests of this group and its associations. It is actively involved in several civic duties as well as promoting, supporting and organising high profile events such as the recent first ever Turkish Cypriot Festival. The attendance of over twenty thousand people at this event was an outstanding achievement and a poignant moment for the British Turkish Cypriot community as it proudly embraced its roots and culture.

The overwhelming support that was shown at the festival has prompted CTCA UK to host an Awards Gala Dinner evening to recognise the inspirational people within our community. This evening will be an opportunity to recognise individuals and organisations that have made a difference in 2017. It will also be an opportunity to commemorate a 100 years of the first Turkish Cypriot migrants to the UK.

This special evening will feature a variety of awards, as well as music and live entertainment from an internationally recognised dancer, Ozgen Ozgec. The event will be held on Sunday 1st October at the Imperial Hotel, 61-66 Russell Square, London WC1B 5BB. There will be a drinks reception from 6pm and a three-course meal will be served from 7pm. There will also be a raffle with several high-end prizes including flight tickets. The dress code will be black tie and the cost of each ticket will be £60. Tickets can be purchased by contacting CTCA UK on: 07496267033

Please visit the CTCA UK Facebook page to find out more and to vote for your favourite Newspaper: https://en-gb.facebook.com/ctcauk/