Thugs on a moped threatened a 10-month old baby with a “huge” knife in a terrifying street robbery on a young family. 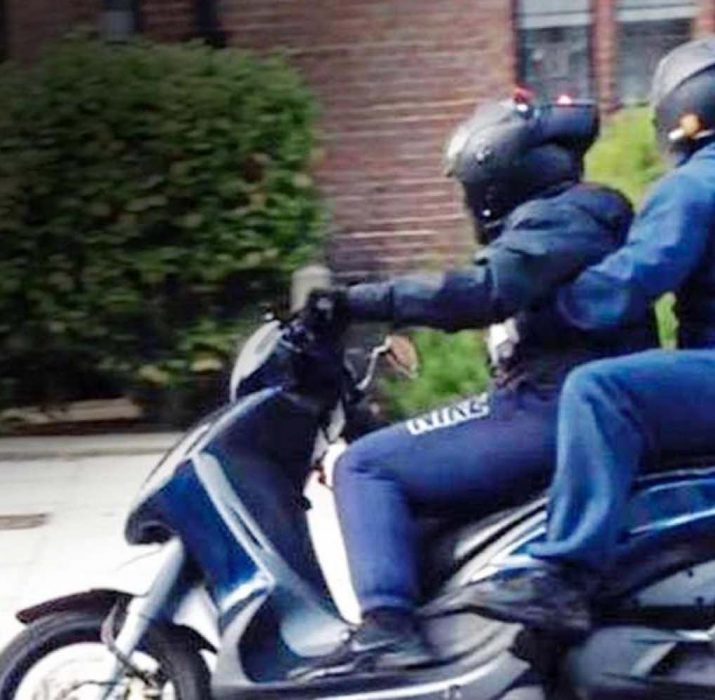 Thugs on a moped threatened a 10-month old baby with a “huge” knife in a terrifying street robbery on a young family.

Caroline Jimenez, 31, today told how one of the thieves held the blade to her baby daughter’s face as they stole her parents’ watches.

Ms Jimenez was with her husband, pushing their daughter in a pram, when they were targeted by two men in motorcycle helmets and balaclavas. She said: “We were just walking around Chelsea enjoying the sunshine, we’d been shopping and we entered the street because it looked nice.

“I saw two men, I thought they looked weird and I was a little scared but there were other people and I thought, ‘This is Chelsea in the middle of the afternoon. Nothing is going to happen.’”

The number of attacks by moped muggers has doubled in London in the past 12 months with a surge in thefts and assaults. Police are struggling to tackle the menace amid safety guidelines that make it difficult for officers to pursue mopeds through the crowded streets. Ms Jimenez, a Belgian national who came to London with her husband seven months ago, posted details of the attack on Facebook and called on Mayor Sadiq Khan to take action.

She said police arrived quickly but told her they were powerless to chase the criminals. “We have just moved here so I do not know what the rules are but I am furious the police cannot protect us,” she told the Standard.

“The police said we were the fourth people to be attacked that day. I just do not understand how the police cannot do anything, it is ridiculous. Now the anger is taking over. They knew exactly what they were doing — threatening a baby, the parents are going to do everything to protect her.”

A Met spokesman said: “Police are investigating a moped-enabled robbery.” The suspects, who fled towards Elystan Place, were white and wore black crash helmets, navy tracksuits and black Nike trainers. There have been no arrests.