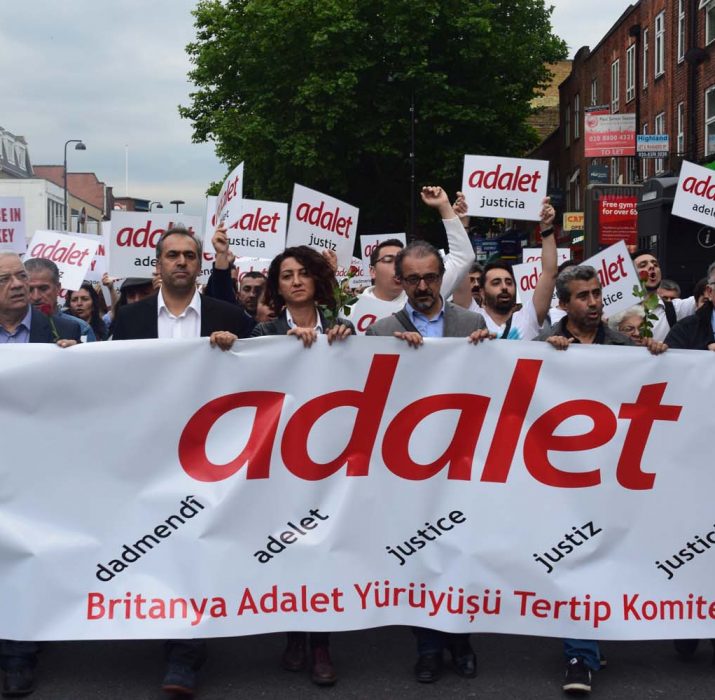 The large group that marched from Manor House to Wood Green, comprised Britain Alevi Federation and CHP UK marching hand in hand. The protesters were handed posters that had “Justice” written all over on it in different languages.

Avoiding any political party references, protesters voiced their concerns ith slogans on secualrism and freedom of speech in Turkey.

“We won’t stop our marches until the punches to freedom of expression and democracy stops in Turkey. The current government of Turkey strives to discriminate and punish any ideology that doesn’t match with their own and we can’t remain silent to it.”

The press statement followed remarks on the need of taking action against the Turkish Government repressions by referring to the upcoming Justice March led by Turkey’s opposition party leader Kemal Kılıçdaroğlu.  Kemal Kilicdaroglu, the head of the Republican People’s Party, or C.H.P., set out on Thursday with hundreds of supporters and journalists in what he said would be a 23-day walk between Turkey’s two largest cities.

Mr. Kilicdaroglu’s protest followed the arrest on Wednesday of Enis Berberoglu, a lawmaker from his party, a move that was seen in Turkey as a watershed moment. While a dozen lawmakers from Turkey’s main pro-Kurdish party had already been jailed in recent months, Mr. Berberoglu is the first from the C.H.P. — the secular party that was created by the founder of the Turkish republic, Mustafa Kemal Ataturk.