Resuming interrupted peace talks on the eastern Mediterranean island of Cyprus is up to the Greek Cypriots, said the Turkish Cypriot leader, two days before a planned leaders’ meeting. 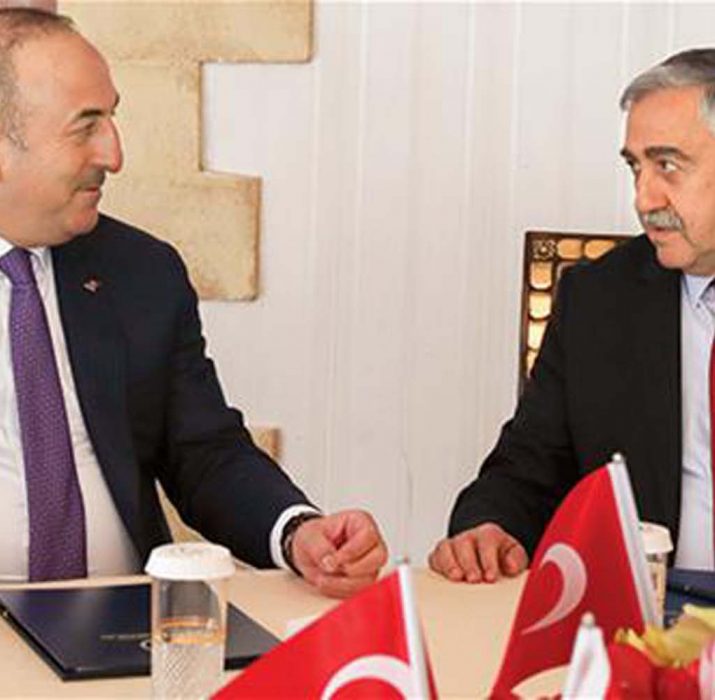 Resuming interrupted peace talks on the eastern Mediterranean island of Cyprus is up to the Greek Cypriots, said the Turkish Cypriot leader, two days before a planned leaders’ meeting.

“It was wrong that the door was slammed …  It is in their [the Greek Cypriots’] hands to return [to the negotiation table] by fixing the situation,” said Turkish Cypriot President Mustafa Akıncı in a joint press conference alongside Turkish Foreign Minister Mevlüt Çavuşoğlu on Feb. 21 in Nicosia.

Akıncı was referring to his Greek Cypriot counterpart, Nicos Anastasiades, who stormed out of a leaders’ meeting on Feb. 16 under the auspices of U.N. special envoy Espen Barth Eide, when the controversial issue of the recent “Enosis” law was being talked about.

Tensions soared over a law passed in the Greek Cypriot parliament that will now permit the celebration of a 1950 referendum, when 96 percent of Greek Cypriots voted for the island to be united with Greece, which is known as “Enosis” in Greek.

Anastasiades denied Akıncı’s claims that he had slammed the door and left the meeting, while also accusing Akıncı of storming out of the meeting.

Eide said it was Akıncı who stormed off but the Turkish Cypriot leader on Feb. 17 accused the U.N. diplomat of “hiding half of the truth.”

“The negativity [brought by the passing of the Enosis law] that has been experienced needs to be fixed,” said Akıncı on Feb. 21. “We have not stopped the negotiations process.”

Akıncı put two clauses forth for the process to be fixed.

He said Anastasiades needed to publicly announce that the “Enosis” decision was wrong, which Akıncı said Anastasiades had told him during the latest leaders’ meeting, in such a way that the Greek and Turkish Cypriot nations would hear this clearly, along with the rest of the world.

Akıncı said his second move to reverse the negativity was for Anastasiades to rescind the law.

Commenting on whether a planned leaders’ meeting set for Feb. 23 would take place, Akıncı said he would welcome the special representative of the U.N. secretary-general, Elizabeth Spehar, later in the day and would ask her what kind of communications the U.N. has conducted with the Greek Cypriot side in order to solve the issue and how they responded to Akıncı’s call.

“We will decide [whether to attend the Feb. 23 meeting] after evaluating all of these,” Akıncı said.

Akıncı also said the ongoing peace talks were the last chance for the island and that they had come to the last stage of the peace talks with the realization of the five-party conference in January in Geneva with the participation of the three guarantor states, Turkey, Greece and the United Kingdom.

He said the Greek Cypriots should understand the importance of the forthcoming few months, as nothing stays the same and “the demography and physical situation” of the island may also change.

Çavuşoğlu, for his part, said the people who wanted “Enosis” should “come to their senses,” adding that the Greek Cypriot side should “mend their faults and return to the negotiations table.”

“They should give up their raw dreams,” Çavuşoğlu said.

Çavuşoğlu said that with the “Enosis” law to be taught in schools, the Greek Cypriots had put forth “their real intention.”

“The Greek Cypriot side of the island and also the world needs to accept that the Turkish Cypriot side is an equal nation and member of the island,” he said, adding that if this was not recognized, then it would show a reluctance to reach a deal on the island. (hürriyetdailynews)