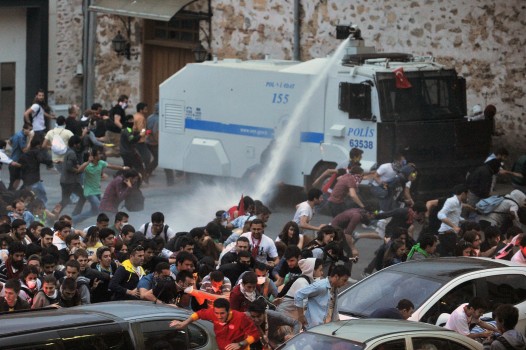 Water cannon is widely and regularly used against protesters in Turkey

After a six-week consultation sparked by the riots of August 2011, Mr Johnson said this week: “No one wants to see water cannon routinely deployed on the streets of London but having carefully weighed up all the evidence, I have concluded there is broad support amongst Londoners for the use of this measure by the police in limited circumstances.”

Lawyers from advice charity the Police Action Centre have revealed they will apply for a judicial review of the Mayor’s decision to proceed with the scheme.

London Assembly member Jenny Jones said: “I am pleased the Police Action Centre is pursuing a judicial review against the Mayor’s decision on water cannon.

“The Mayor has ignored the responses to his own engagement which were 59 in favour compared to 2,547 against water cannon.

“He has also ignored the detailed assessment published by the London Assembly, including members of his own Party and team.

“He has by-passed informed opinion and pushed ahead with his plans to let the police have this weapon.”