Thousands of people have joined protests in London and in cities around the UK against a controversial travel ban on seven mainly Muslim countries imposed by US President Donald Trump. 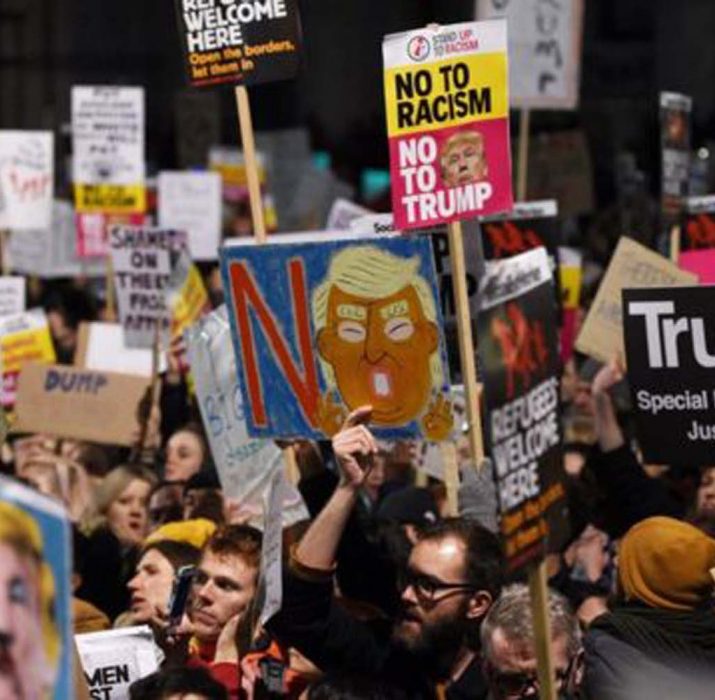 Thousands of people have joined protests in London and in cities around the UK against a controversial travel ban on seven mainly Muslim countries imposed by US President Donald Trump.

MPs are holding an emergency debate on the immigration measures.

A petition calling for PM Theresa May to cancel Mr Trump’s planned state visit to the UK has gathered more than 1.5 million signatures.

The demonstration in London, organised by author and columnist Owen Jones, took place outside 10 Downing Street.

The crowd chanted slogans including “shame on May”. Reporters at the scene said there were several thousand people on the streets.

The prime minister’s office said earlier in the day that Mrs May was “very happy” to extend the invitation to Mr Trump on behalf of the Queen.

Mrs May is also facing growing calls to say whether she was briefed on the controversial travel ban when she met Mr Trump in Washington last week.

Demonstrations also took place in Manchester, where about 3,000 people attended.

“I think it is really hard to make sense of the extreme way in which Donald Trump seems to be taking forward the first few days of his presidency, and how even in America people are defying the courts which are saying no, Trump can’t do this.

“To me, if someone has the power to get into the minds of people to the extent where they will disobey the courts, then the whole world is in a really, really dangerous place.”

Clare Solomon, who helped organise the protest in Manchester, said people wanted “to show their disgust at a racist, sexist president.

“We think Theresa May is a disgrace for holding hands with him and inviting him for a state visit.”

Charlotte Winstone, 22, a theatre producer, was among those attending the London protest.

She told the BBC: “I can’t believe something like this is happening in my lifetime. People legally allowed to be in the US, people with Green Cards, with visas, are being held against their will, all at the whim of one man’s hatred.

“We all sat in history lessons hearing about the persecution of Jewish people in Nazi Germany, feeling that if it happened now we would stop it. This is our opportunity to make sure something like that doesn’t happen again.”

Jocy Levy, 25, travelled to London from Ongar in Essex to attend her first demonstration.

She said: “This protest struck a chord with me because I’m Jewish and I feel like I wouldn’t be here if it weren’t for immigration and for countries welcoming refugees.

“So I felt like I couldn’t be somebody who just stood by… Even if it’s doing something small like attending a protest or making a placard.”

Ms Levy’s placard read: “Anne Frank could have been an 87-year-old living in Boston today but she was denied a Visa.”

Writing on the event’s Facebook page, Mr Jones said: “Donald Trump has imposed a ban on people from seven Muslim-majority countries from entering the US.

He added: “Let’s stand in solidarity with those targeted by Donald Trump’s hateful government, including the people of this country, outside Downing Street and all over Britain.”

Critics of Mr Trump’s policy have called it a “Muslim ban” – a charge his administration denies.

Mrs May has faced heavy criticism for refusing several times to condemn the crackdown when asked during a visit to Turkey.

Downing Street issued a statement late on Saturday night saying that the prime minister “does not agree” with Mr Trump’s travel ban but that US immigration was a “matter for the government of the United States”.

The Labour leader, Jeremy Corbyn, said Mr Trump “should not be welcomed to Britain while he abuses our shared values with his shameful Muslim ban and attacks on refugees’ and women’s rights”.(bbcnews)