Vase kept in kitchen for 40 years sells for £1.5 million 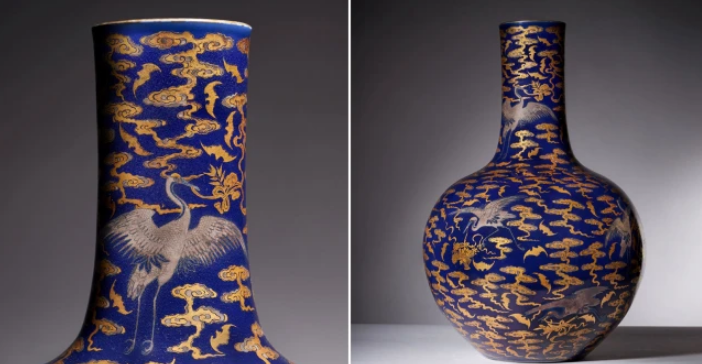 We all dream of hearing that old heirloom we keep in the basement is secretly worth a fortune.

Most of the time, it really is worth the £2.50 our grandad paid for it at a car boot sale – but, every now and again, dreams come true.

That’s what happened for one man in England who has scored almost £1.5 million for an old vase sitting in his kitchen.

The vase was bought by a surgeon for a few hundred pounds in the 1980s.

It was handed down to his son who had no idea of its worth until a visiting antiques specialist spotted it.

It turned out to be an extremely rare 18th century Chinese vase made for the court of the Qianlong Emperor in the 1700s.

The 60cm blue-glazed, silver and gilt vase, decorated with cranes and bats was estimated to be worth between £100,000-£150,000 by Berkshire-based Dreweatts Auctioneers.

But worldwide buyers went to battle over it at an auction on Wednesday, with one pledging £1.2 million over the phone.

Mark Newstead, from the auction house, said: ‘We are delighted with this exceptional result.

‘We saw widespread interest from China, Hong Kong, America and the UK which resulted in very competitive bidding.’

The vase has been was described as ‘a testament to the creativity’ of craftsmen working during the Qianlong period who used enamelling techniques to cater to the emperor’s taste in exotic styles.

It would require at least three firings in the kiln for the different colours, including at over 12000C for the cobalt blue.

The auction house said: ‘The rich cobalt blue is often referred to as ‘sacrificial blue’, deriving from the use of vessels in this colour glaze being used during sacrifices at the Imperial Altar of Heaven.

‘It is extremely rare to see blue vases painted in both gilding and slightly raised silver, thought to be due to the medium being difficult to control.

‘Thrillingly, no other porcelain decorated with the same subject in gold and silver appears to have ever been documented.’

It also bears the distinctive six-character mark of the Qianlong period between 1736 and 1795 on its base.