Trio Arisonto, consisting of violinist Ezo Sarıcı, horn player Annemarie Federle and pianist Dafydd Chapman, who made their name known at a young age with the competitions they won such as BBC Young Musician of the year, dazzled in their first concert.

Trio Arisonto, held two concerts at St Stephen’s Church on Thursday, October 21, and Friday, October 22, attracted attention with the challenging pieces they chose in their concert repertoire. The collaboration of young musicians, who meticulously interpret special compositions, which are considered masterpieces of virtuosity, is considered an early peak. 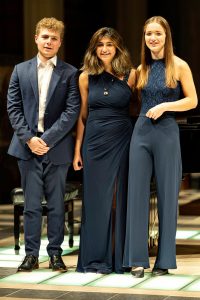 Trio Arisonto, whose three members are studying in the second year of the Royal Academy of Music,  opened with “Adagio and Allegro” composed for horn by Schumann, one of the leading composers of the Romantic Period, performed by horn player Annemarie Federle, and continued with Debussy’s piano “Preludes” presented by pianist Dafydd Chapman. Violinist Ezo Sarıcı, who took the stage in the final of the first half, interpreted “Tzigane” (Gypsy) written by Ravel, one of the important composers of the 20th century, for violin virtuosos.

Trio Arisonto performed the famous piece “Libertango” by Astor Piazzolla, one of the important composers of jazz history, with his own arrangements, upon intense applause at the end of the concert.

The trio, were admired in their first concert with their high instrument mastery, received invitations from festivals in Portugal and Italy for events next August and September. 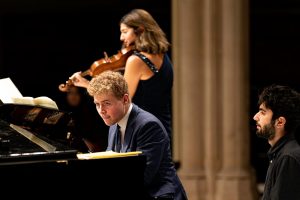