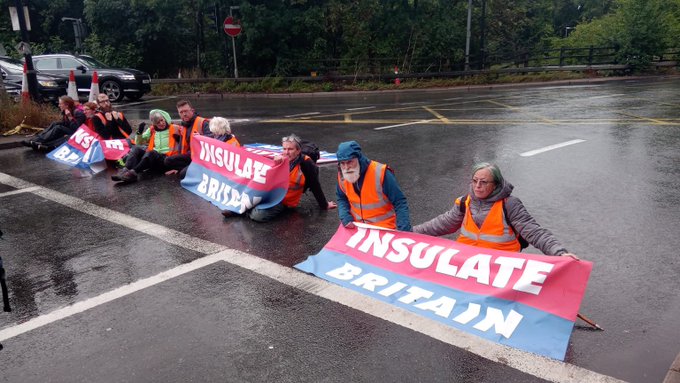 Climate change activists have asked drivers not to use the M25 tomorrow as they prepare for another sit-down protest.

Insulate Britain, which has caused chaos on major roads over the past few months, is continuing to stage blockades despite the threat of legal action.

The Extinction Rebellion offshoot group says the M25 will be a ‘place of nonviolent civil resistance’ from Wednesday morning.

It comes after protesters caused chaos in central London yesterday, ending a 10 day hiatus, with one activist gluing his face to the floor to send a message.

As a result, a nationwide High Court injunction was granted covering the ‘entire strategic road network’ in a bid to stop demonstrators in their tracks.

They could face an unlimited fine or up to two years in prison for contempt of court if they go ahead with more blockades.

But previous injunctions have been granted for major roads previously, including the M25, and haven’t appeared to have deterred demonstrators.

In a new statement, Insulate Britain asks drivers to ‘not use the M25’ or to ensure ‘speeds are reduced to 20mph to minimise the risk of accidents’ if they do.

The group adds: ‘The Highway Agency (National Highways) acts on its responsibilities to keep the public safe by enforcing this speed limit.

‘The police refuse to arrest us, as we are upholding the British constitution and they have a duty to refuse to obey any government that fails to uphold its first and most important responsibility: the protection of people in Britain.’

The resumption of the blockades coincides with the run-up to the United Nations COP26 global climate conference, which starts in Glasgow next week.

Yesterday Transport Secretary Grant Shapps wrote: ‘Insulate Britain are back, risking lives & ruining journeys. 3 specific injunctions are already in place, but today I instructed @NationalHways to apply for an injunction covering the entire strategic road network – tonight this has been granted on a temp basis by the High Court.

‘This includes unlimited fines & prison sentences of up to 6 months for obstructing highways.’

Insulate Britain has been calling on the Government to ensure all homes are properly insulated by 2030 to cut carbon emissions.