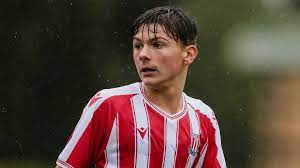 Chelsea, Manchester City and Manchester United are among the sides tracking the prolific Tezgel, described by Stoke’s academy director Gareth Owen as ‘a Harry Kane-type forward.’

Ezgel only turned 16 last month but was a regular for Stoke’s under-18s last season and trained with their under-23s during the summer.

Tezgel is currently part of the England under-17 setup and provided further glimpses of his potential during the September international break.

He scored four goals in three games to help Tom Curtis’s side to the Syrenka Cup final in Poland, which they lost 3-2 to Holland.

Tezgel followed in the footsteps of the likes of Jude Bellingham by being named player of the tournament. Captain Bellingham earned that honour following the 2019 tournament, which England won on penalties against hosts Poland.

Stoke academy boss Owen said of Tezgel and his qualities: ‘He’s a Harry Kane-type centre-forward. That gets bandied about but his movement is good, he can hold the ball up and he is decent in the air…”