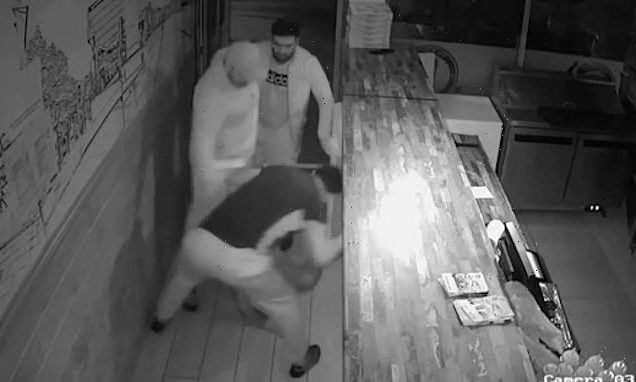 A trio of kebab shop workers who left a suspected burglar with a broken cheek, eye, jaw and arm after accusing him of targeting their restaurant have been jailed.

Zafar Ahmed, 35, alongside brothers Asmat Khan, 33, and Mohammed Khan, 25, were each handed two-year sentences after the incident at Victoria Kebabs in Nottingham on June 12 last year.

Asmat Khan had approached Adrian Perry while he was standing outside the kebab shop and believed he was involved in a break-in at the premises earlier in the day.

Eventually the trio dragged Mr Perry into the shop where he was beaten after the security shutters had been closed.

This part of the attack was ‘too disturbing’ to show, said police.

Nottinghamshire Police was called after a member of the public spotted the commotion. Upon arriving one of the men told officers ‘he burgled the shop’.

Perry, who did not cooperate with the police investigation, was previously sentenced to two years and four months in prison after pleading guilty to burglary over a separate incident which took place above a pub on Christmas Day in 2018.

Following the attack on June 12, he suffered numerous ‘grave’ injuries including fractures to his eye socket, cheekbone, jaw, and a fracture to his forearm.

Judge Steven Coupland jailed each defendant for two years, of which they will serve half and the remainder on licence.

Detective Inspector, Danny Johnstone, of Nottinghamshire’s criminal investigation department, described the attack as ‘barbaric’, while the judge questioned why they hadn’t simply called the police if they suspected anything was amiss.