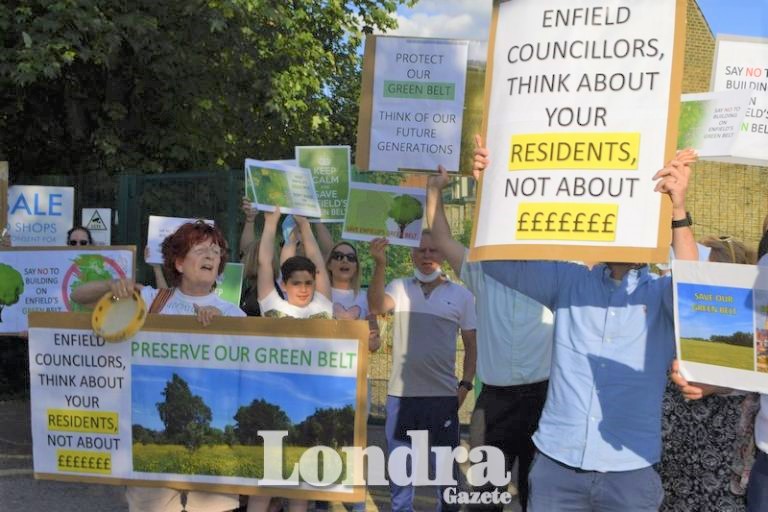 The protest was held in front of Enfield Grammer school, where councillors met to vote on allowing a continuation for proposed plans on green belt land to go ahead or not.

Enfield residents included members from the Turkish Speaking community joined together with slogans and banners in the protest. 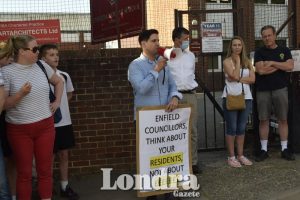 Enfield councillor Ayfer Orhan, who recently resigned from the Labor Party, stated that she would support the activists and vote against this continuation as before entering the meeting, stopping to talk with the protests and hear their concerns.

Activists came together to oppose the developer’s proposal to build up to 3,000 new homes at Vicarage Farm, as well as a second site that could overall see some 6,000 new homes built on green belt land.

Save Enfield, have aid that “…For many of us this area has provided a sanctuary during the lockdown, it is the lungs of our homes,  a view that makes us smile daily and the reason why we chose to move to our homes. This might be taken away from us.” 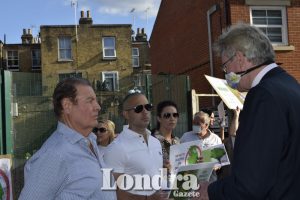 Speaking to Londra Gazete  Hasan Hürer said: “The reason I am here right now is because I live in this area and the part of the green area at risk under this plan is my area. The reason I moved to Enfield, and that area, in particular, was because of the green belt and beauty there. I also have a son who has asthma. So I wanted to be in a really good, clean place for his health and close to the benefits you get from a green belt. There is a plan to connect 3 thousand houses to the green belt, but it is a proposal from the city council. The land has already been sold to an investor and now Enfield seems to be working with the investor.

“Clearly there is some truth or awareness that there is a developer interested in building, so they want to let him. What we all know is that the investor keeps his horses there and is a wealthy person living abroad. Horses and land area for their enjoyment. They owned the land for 15 years and there was no attempt. Given that Enfield is valued for its green belt, you would expect the city council to want to honour and protect it. 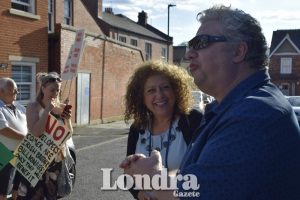 “The reason I’m here today is that we weren’t told anything, someone wrote on whatsapp what was going on in a partner group and that’s how I was informed and shocked. Everyone was shocked that this happened and we were not informed. That’s why we want councillors to understand that we care about the green belt and Enfield. Not only do they want to develop the green belt, but they also want to develop all the supermarkets, Enfield Town and Edmonton Green centre. Offering compensation of £3,500. So they really think people’s livelihoods and jobs are worth £3,500 in their pockets? That’s the truth, everything is about money.”

The meeting was held with a majority of councillors voting to approve the draft local plan for consultation. 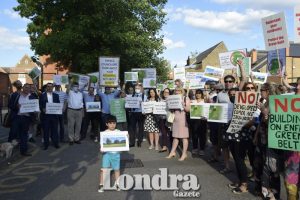