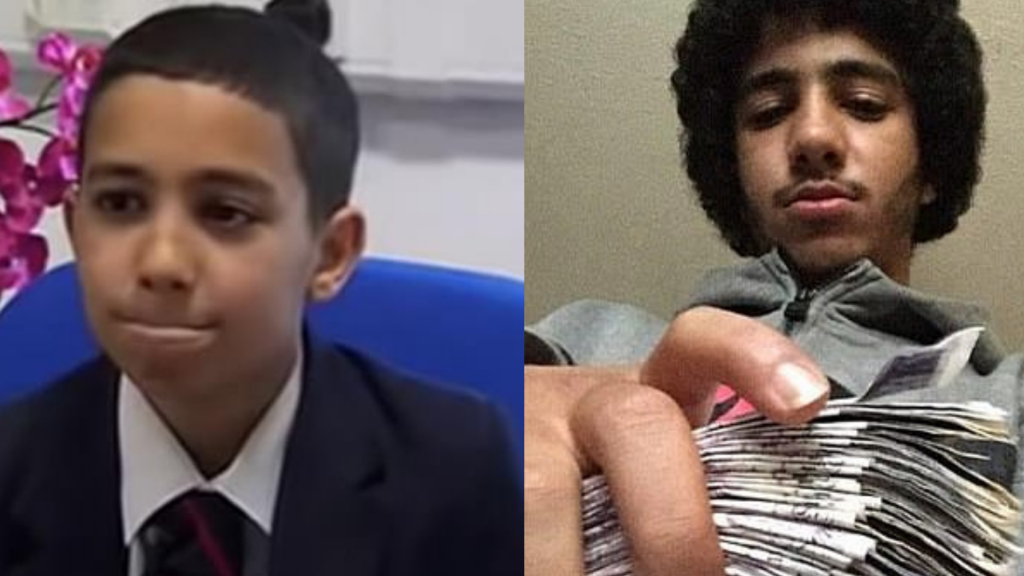 A prison rapper who was part of a County Lines gang that waved cash and zombie knives in drill rap videos appeared in a Channel 4 documentary as a child.

The popular fly-on-the-wall programme captured his experience as a Year 8 pupil at Frederick Bremer School in Walthamstow, east London.

As a 13-year-old, Karagozlu was restrained by teachers and sent home from class after being disruptive and lashing out at fellow pupils.

In footage from the show, he tells interviewers he wants to steer clear of the ‘wrong path’ and follow in the footsteps of his grandfather Ahmet – who was a detective in Cyprus.

‘I’m not sure which side to go after, criminal or police – I would probably choose police though,’ he said.

Ahmet added: ‘He did swear so many times that he’s not going to embarrass me anymore. I spent half of my life fighting against this kind of people.’

Karagozlu and his brother Ahmet were part of the WEZ gang, which is part of the larger DM Crew gang. It is said they are affiliated with the notorious Mali Boys.

The group, jailed for a total of 43 years in May 2019, had sent children as young as 13 to force their way into addicts’ homes and sell drugs.

Ahmet Karagozlu, pleaded guilty to conspiracy to supply Class A drugs and was sentenced to eight years and eight months.

His brother Halil Karagozlu, pleaded guilty to conspiracy to supply Class A drugs and was sentenced to six and a half years in a Young Offenders Institution.

Kaan Cicek was found guilty of two counts of wounding and one count of conspiracy to supply Class A drugs. He was sentenced to a total of 10 years in custody and an additional three years on licence once he has served his custodial sentence.

Ozlem Simsek received a total of three years and four months in custody after pleading guilty to conspiracy to supply Class A drugs.

Byron Whitfield was found guilty of conspiracy to supply Class A drugs and was sentenced to seven years in a Young Offenders Institution.

Matthew Keeley pleaded guilty to conspiracy to supply Class A drugs and was sentenced to two years and eight months in custody.

6 other member of the WEZ Network were sentences are an early court hearing that year.

While members such as Kahan Hasan Has, was found guilty by a majority verdict of two counts of conspiracy to supply class A drugs. and sentenced to four years and banned from driving for four years in October 2019.