YUNUS Emre Institute (YEE) in London first opened its doors in the capital back on November 9 201. YEE celebrated its 10th anniversary having provided Turkish language education while showcasing Turkish culture and language in the United Kingdom through organising numerous colourful arts and cultural events every year.

Established in November 2010, Yunus Emre Institute in London celebrates its 10th year anniversary this year. Today, the Institute continues to be the leading provider of online and formal Turkish language education.  So far more than 2,000 students so far, continue its Turkish teaching activities both in a physical and digital environment.

In a statement, YEE said: “Yunus Emre Institute in London promotes friendship ties in the cultural sphere. To date, the Institute has organised and hosted over 545 cultural events at 76 different locations, held 143 course, 80 workshops, 40 exhibitions, 153 talks, 63 concerts, 86 film screenings, partnered with 47 other institutions and housed over 200 meetings. Yunus Emre Institute in London has also contributed to the promotion of Turkey’s rich cultural heritage with the Karagöz and Hacivat Project in which the shadow play was performed to many UK primary schools and institutions in the  English and Turkish languages. As part of the ‘A Pinch of Anatolia’ Project, world-renowned chefs Musa Dagdeviren and Omur Akkor introduced a variety of Turkish delicacies through their tasting menus and talks. In addition, 35 students who attended classes at the Yunus Emre Institute in London received a scholarship to travel and attend the Turkish Summer School hosted in Turkey.” 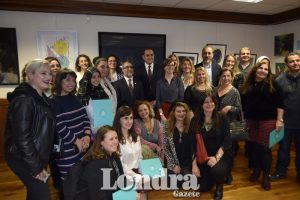