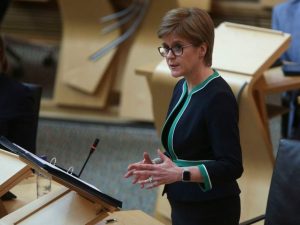 Nicola Sturgeon has kept open the possibility she will launch her push for Scottish independence in a referendum next year.

The first minister said she was not ruling the possibility out, but warned “we don’t know” yet when the pandemic will end so while coronavirus grips the world her “energies are focused on that”.

She has only revealed she wants the vote to be in the early part of the next Scottish parliamentary term, following elections to Holyrood in spring 2021.

If the Scottish National Party win a majority, senior figures claim it will give them the mandate to demand Boris Johnson grant MSPs the power to call a referendum.

But the prime minister has said he will refuse to do so, leading to unanswered questions about what the SNP would do next.

That is a subject that divides hardliners who want a Catalonia-style illegal referendum and those prepared to play the long game who think the refusal to allow a vote will only fuel support for independence.

In an interview with Sky News Ms Sturgeon said on today (30 November): “We are still, like other countries the world over, in a global pandemic. There’s lots of uncertainties ahead of us right now.

“We don’t know – I think we’re all a lot more hopeful the end of the pandemic is in sight – but we don’t know yet exactly when that will be so my energies are focused on that.”

Adding: “I want to see it in the early part of the next term of the Scottish parliament rather than the later part.

Angela Rayner:  ‘Thousands’ of labour members could suspend over antisemitism