Chancellor sets out plans for the economy to tackle COVID-19

THE “economic emergency” caused by Covid-19 has only just begun, according to chancellor Rishi Sunak, as he warned the pandemic would deal lasting damage to growth and jobs.

The UK economy is expected to shrink by 11.3% this year and not return to its pre-crisis size until the end of 2022. 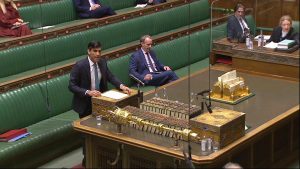 Delivering the Spending Review, Rishi Sunak said his immediate priority was to protect people’s lives and livelihoods as the country continues to battle the outbreak – allocating £55 billion to tackle the virus next year.

While delivering his plan in parliament Sunak also announced cuts foreign aid to says that “sticking rigidly to spending 0.7% of our national income on overseas aid” is “difficult to justify”, “especially when we’re seeing the highest peacetime levels of borrowing on record” Adding “our intention is to return to 0.7% when the fiscal situation allows”.

He also said a public sector pay freeze will be also implemented for some says “I cannot justify a significant, across-the-board pay increase for all public sector workers” so “instead, we are targeting our resources at those who need it most”.