Bank of England: ‘Long-term effects of No-Deal could be worse then Covid-19’

Anasayfa » News In English » Bank of England: ‘Long-term effects of No-Deal could be worse then Covid-19’ 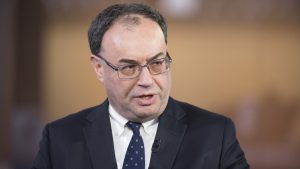 The long-term economic effects of a no-deal Brexit will be more damaging than those of the coronavirus pandemic, the governor of the Bank of England has said.

Andrew Bailey said disruption to international trade caused by the failure to reach an agreement would not be in the interests of the UK and that it would take a long time for the British economy to adjust the new trading conditions.

The governor’s analysis contrasts with that of Boris Johnson, who has claimed against evidence that Britain would “prospect mightily” under a no-deal.

Chancellor Rishi Sunak also said this weekend that the UK would “prosper in any eventuality”. Negotiators are running up against the deadline to secure a deal this month, with sticking points on fishing and state aid rules.

He added: “It would be better to have a trade deal, yes, no question about it.”

The governor’s prediction comes after an analysis by the London School of Economics and the think-tank UK in a Changing Europe released in September warned that the economic impact of a no-deal would the two to three times worse than the pandemic.

The study found that failure to reach an agreement would see a reduction in GDP worth 8 per cent over a decade compared with remaining in the EU.

While the Covid-19 pandemic has seen Britain weather a 20 per cent fall in GDP in a single quarter, much of the damage is expected to rebound when restrictions are able to be lifted.

Despite the looming deadline, negotiations are currently taking place by video call only after one of the EU’s negotiating team tested positive for coronavirus, necessitating a period of self-isolation.

Boris Johnson and the European Commission president, Ursula von der Leyen, are expected to speak on the telephone before the weekend, as adherence to a supposed mid-November deadline for striking an accord looks increasingly far-fetched.

Britain technically left the EU early in 2020 but will remain in a transition period until 11pm on 31 December 2020, when it will leave the single market and customs union, and stop following EU rules. The UK and EU are currently negotiating a trade agreement to govern their future relations.