Scientists accidentally discovered a new organ in the throat 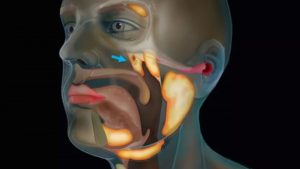 SCIENTISTS in the Netherlands say they have identified a potential new organ in the human throat.

Researchers say the newly-found set of salivary glands are likely being used for moistening and lubricating the upper parts of the throat, and that they stumbled upon them while carrying out research on prostate cancer.

The study was published in the journal Radiotherapy and Oncology by a team of researchers including those from the Netherlands Cancer Institute (NCI).

The research said that the throat in humans contains “previously overlooked bilateral macroscopic salivary glands” which the scientists named as “tubarial glands”. The researchers examined at least 100 patients to confirm their findings and found that all of them had the glands.

Dr Wouter V Vogel of the NCI, one of the researchers involved in the study, emphasised that their next step is to ascertain how these glands can be spared from radiation.

Dr Vogel told the New York Times the glands had remained undetected because of their location at the base of the skull. They are also small, he said, though visible to the human eye, so were only picked up by very sensitive imaging technology.