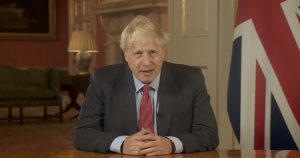 Prime Minister Boris Johnson has urged Britons to “summon the discipline and the resolve” to avoid a second national lockdown after warning there have been “too many breaches” of coronavirus rules.

In a televised address to the nation, Mr Johnson called on the public to “get through this winter together” as he set out a series of new Covid -19 restrictions – including earlier closing times for pubs, bars and restaurants.

Asking for compliance with the fresh measures, he said: “Never in our history has our collective destiny and our collective health depended so completely on our individual behaviour.”

The prime minister admitted that coronavirus has “started to spread again in an exponential way” and sent a stark warning of “many more deaths” if action was not taken now.

Describing the disease as “the single biggest crisis the world has faced in my lifetime”, Mr Johnson said that he knew the UK could succeed in pushing back the virus “because we have succeeded before”.

However, faced with a second wave of infections, the prime minister acknowledged that “while the vast majority have complied with the rules there have been too many breaches – too many opportunities for our invisible enemy to slip through undetected”.

He said that his government would continue to work “night and day” to fight to protect the public.

But he stressed the “single greatest weapon we bring to this fight is the common sense of the people themselves – the joint resolve of this country to work together to suppress COVID now”.

The prime minister dismissed suggestions that people should be allowed to take their own risks with coronavirus, adding: “The tragic reality of having COVID is that your mild cough can be someone else’s death knell.”

He also rejected the idea that only the elderly might isolate themselves from the risk of catching the disease.

“If you let the virus rip through the rest of the population it would inevitably find its way through to the elderly as well, and in much greater numbers,” Mr Johnson said.

The prime minister admitted he was “deeply, spiritually reluctant” to impose the further restrictions he had set out earlier in the day and warned that a new national lockdown would “threaten not just jobs and livelihoods but the loving human contact on which we all depend”.

“We must do all we can to avoid going down that road again,” Mr Johnson added.

But he insisted that “if people don’t follow the rules we have set out, then we must reserve the right to go further”.

The prime minister offered some optimism with his assertion that the country is “better prepared than before” for a fresh wave of coronavirus infections.

And he declared that scientists were “unanimous that things will be far better by the spring” when there are hopes of a vaccine and of mass testing system.

Yet the government was acting now to impose further restrictions because “a stitch in time saves nine”, Mr Johnson said.

“If we follow these simple rules together, we will get through this winter together,” he concluded.

“There are unquestionably difficult months to come and the fight against COVID is by no means over.

“I have no doubt, however, that there are great days ahead.

“But now is the time for us all to summon the discipline, and the resolve, and the spirit of togetherness that will carry us through.”

The prime minister’s TV address was his third to the nation since the beginning of the coronavirus crisis.

It came on the same day that another 4,926 people were confirmed to have tested positive for coronavirus in the UK – the highest daily figure since 7 May.

A further 37 people have also died within 28 days of testing positive for COVID-19 – the highest number reported in one day since 14 July.

Earlier on Tuesday, Mr Johnson had announced the new COVID-19 restrictions for England in a statement to the House of Commons.

PM: Covid-19 measures could ease by mid-February
Boris Johnson said the government will be “looking at the potential of relaxing some measures” before the middle of next month. Speaking at a vaccination site at Barnet Football Club in north London, the prime minister said: “We’re looking at the data as it comes in, we’re looking at the...
0