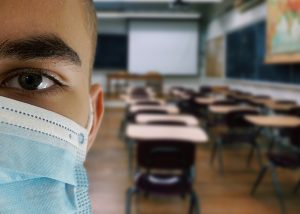 The business secretary, Alok Sharma, has said there are no plans to review the wearing of face masks in English schools despite a plea from headteachers.

The Association of School and College Leaders (ASCL), a trade union that represents more than 19,000 senior staff, has called on the government to review its guidance.

It comes as the Scottish government confirmed on Tuesday that secondary schools would be given “obligatory guidance” that pupils should wear face coverings in corridors, communal areas and school buses from next Monday.

The World Health Organization and Unicef, the UN children’s agency, says those aged 12 and over should wear masks to help tackle the Covid-19 pandemic, “under the same conditions as adults, in particular when they cannot guarantee at least a one metre distance from others and there is widespread transmission in the area”.

With English schools due to reopen next month, Sharma said on Tuesday the UK government had no plans to review wearing face masks in schools. It followed a similar statement from Downing Street on Monday.

“Firstly, I think it’s really vital that we get all schoolchildren back in September. And when it comes to face coverings, we have followed the scientific advice and medical advice that we’ve been getting and we’ve made it very clear that in certain settings, such as transport or in shops, it is mandatory,” Sharma told Sky News.

“But Public Health England has provided advice that has been consistent throughout and, of course, schools have been open throughout this pandemic period serving, taking care of vulnerable children, the children of key workers … but Public Health England has been very clear, which is that they do not recommend the wearing of face masks in schools and the reason for this is because children, pupils are obviously mixing in the same cohorts.

“We’ve also provided, through Public Health England, guidance in terms of how schools can keep children safe, how they can keep teachers safe, how schools can be secure, Covid-secure environments. So there is no current plan to review that particular guidance.”

Sharma highlighted statistics from PHE showing that in June there were on average around 1 million children in preschool and primary settings and there were 70 incidents of infection.

The National Association of Head Teachers urged the Westminster government to watch and learn from events in Scotland, where children are already back in school.

A spokesman said: “At present, the scientific advice in England does not recommend the use of face coverings in schools. Where there are individual members of staff or pupils who feel the need to wear a mask in order to feel safe enough to come to school, then we have confidence that our members would be able to make a sensible decision and allow that.

“We recommend that the government keeps the scientific advice under review and keeps a close eye on the Scottish system. Their school return is a couple of weeks ahead of where we are in England, and there could well be useful things to learn from what they are experiencing north of the border.”