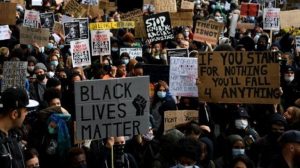 THE Turkish Kurdish Community Solidarity Center (Day-Mer) youth committee voiced their support in the fight racism across the world, especially in America, and voicing their demands.

The statement made by Day-Mer Youth is as follows: “As Day-Mer Youth, we want to state that we stand and support the struggle against racism in America and all over the world, primarily faced by black peoples. But the UK is not innocent because Black people have been subjected to more pressure, exploitation, institutional racism and violence for centuries by the same system.

At the same time, Covid-19 respects and gratitude to all workers, especially doctors, nurses, cleaners, courier, postman, bus driver and shop workers from Black, Asian and Ethnic Minority (BAME), who work at risk during the epidemic period and died due to a rotten and unjust system. After George Floyd, who was brutally murdered by racist police brutally, the peoples who came to the streets in anger – especially youth – demand not only justice and equality but also a real change…”

Highlight that funding in education is needed, the need to address institutional racism in the police organization, the removal of sculptures and street names of people who link to historic racism and the government arm deal with the USA need to be looked into.

Adding: “Once again, we call on all our young friends to take part in this struggle to strengthen the organized struggle. We know that if we merge, we will not be defeated. Our Union is Our Strength! Black Lives Matter! ”