‘The Migrants Story of Arpalık’ to be screened in London

A documentary that shows the forced migration of Turkish Cypriots in 1964 will be screen in London.

‘The Migrants Story of Arpalık’ (Göçün Hikayesi Arpalık) directed by Girne American University (GAU) Faculty of Communication Press and Deputy Professor Doctor Muharrem Özdemir was first shown on the BRT screens on December 21, 2019, at 17:05 in the Turkish Republic of Northern Cyprus (TRNC).

GAU Faculty of Communication Dean Dr Assoc  Neriman Saygılı and Head of the Press and Media Department Assoc. Dr Muharrem Özdemir will be coming to London to screen the Documentary.

Speaking about the document Özdemir said: “We prepared this documentary in collaboration with BRT television. We have done such a study to make our world justify our struggle and voice, to remember the suffering and to make our martyrs forget. ” 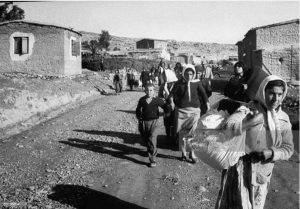 The bitter events of the Arpalik which have been documented will be brought to London by the TRNC London Representative Oya Tuncalı, London Yunus Emre Enstitüsü President Mehmet Karakuş, Cyprus Turkish Associations Council President Leyla Kemal and Secretary Ertuğrul Mehmet.  The documentary screening at Yunus Emre Institute at 10 Maple Street, Bloomsbury, London W1T 5HA will start on Thursday, March 12, at 18:00.