Turkish and Kurdish Community Solidarity Center (Day-Mer) held its 20th General Assembly Meeting (AGM) in London. At the end of the congress, a new board of directors was elected for two years.

Day-Mer which celebrated its 30th-anniversary in England last year held its 20th AGM in London on Sunday 26 January. 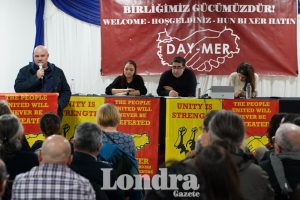 Day-Mer President Aslı Gül said that despite the increase in racist and reactionary attacks in England as well as in the world, the flag of struggle has been raised in all countries. Gül said that Boris Johnson’s government has already raised its attacks in areas such as health, education, social services, and housing and that they will increase the struggle against local workers against each other.

Gül stated that, as Day-Mer they have been struggling against the problems of the society and the country in which they live for 30 years, and that they will raise the bar by developing new methods of struggle in line with the changing socio-economic structure both in society and in England. 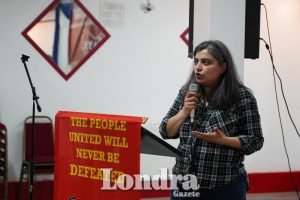 That the AGM Day-Mer’s activities were discussed and the important developments experienced by workers, labourers and immigrants in the world and in England during the last two years, guest representatives who made a short speech, praised Day-Mer contribution to the working-class struggle in England. They said they would continue their usual solidarity.

Extinction Rebellion Nick Onley: Every week, our world faces a disaster. We have provided a serious counteraction against these, from bridge occupations to field actions. Hopefully, we will continue to do this struggle together.

Stand Up Against Racism’s Michael Bradley: Johnson power continues to raise racist and discriminative hate speech. As before, I believe that in this period, we will grow our struggle shoulder to shoulder. During the march against racism on March 21, we will see DAY-MER members with us. I hope all Turkish and Kurdish communities listen to DAY MER calls and take their place in the action.

Socialist Workers Party Charlie Kimber: DAY-MER is an example not only for Turkish and Kurdish institutions but also for all immigrant organizations organized in the UK. Both have an important part here is that both combat and role models feature DAY-Mer having procedures and policies to support the struggle for democracy in Turkey. 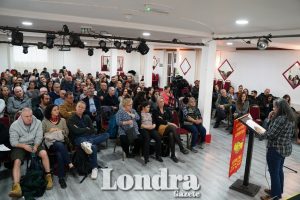 Writer Aydın Çubukçu emphasized the culture and artworks of DAY-MER and the importance of what they did in this field. Çubukçu stated that they have important features that distinguish DAY-MER from other immigrant organizations and said, “Day-Mer is a mass organization that has a tendency to learn other cultures.” Çubukçu continued his speech as follows:

“Day-Mer also knew how to turn to culture and culture of struggle in England where it struggled. In England, it is also aimed to recognize the historical struggles and rebellions of workers such as Diggers and Tulpuddle. Included in this. From the first day of its establishment, it has turned to this study and has made its cultural studies an important part of the struggle, struggling with local workers. For all these reasons, DAY MER is different ”

After the DAY-MER administration presented its annual report to the congress, the reports of youth, women and culture and art commissions were read. As a result of the elections after the financial report was read and cleared, Aslı Gül, Sena Kartal, Güllü Kuşçu, Güngör Kuş, Mehtap Işık, Anıl Duman, Metin Sağır, Oktay Şahbaz, Çağdaş Canbolat, Orhan Dil and Arif Bektaş were elected to the Board of Directors, Ceren Sağır, Özkan Kurban and Mehmet Göztaş were also elected to the Supervisory Board.

Nine police officers fined for breaking Covid-19 rules
Nine Metropolitan Police officers have been fined for breaching Covid-19 legislation while on duty. Photos shared online earlier this month showed a group of uniformed officers seated at indoors having their breakfast together in South East London. The passer-by took a snap of the officers as they sat indoor on...
0