Evacuations were under way after dramatic floods hit a north London neighbourhood.

Parts of Finsbury Park were submerged after a water main burst at the junction of Queen’s Drive and Princess Crescent at about 7.45am on Tuesday.

The flow of water had only stopped by 1.45pm after engineers managed to shut the valve.

Pictures and video from the scene showed people wading through fast-moving ankle-deep water.

London Fire Brigade said 12 fire engines and 80 firefighters were called to the scene, with a number of basement flats flooded.

A 600 by 200 metre area was hit, with firefighters evacuating neighbours from affected properties. 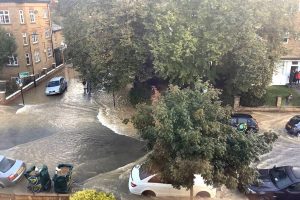 Thames Water said in a statement: “One of our large water mains on Queen’s Drive in London N4 has burst this morning. This has caused flooding to properties in the immediate area, and has also caused customers in N1, N4, N5, N7 and N19 to experience low water pressure or no water supply.

“We’re working with the emergency services to make the flooded area safe, and have teams on site ready to support those impacted by the flooding once we’ve done this.

“Our specialist engineers have been hard at work on site in N4 and have now completed the complex task of shutting valves to stop the flow of water from our main.

“Many customers are now back in supply but some may still be experiencing low pressure or air locks, and we expect to bring the remainder of customers back into supply later this afternoon.” 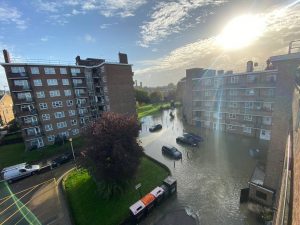