Erdoğan doesn’t love half of us. We don’t love him – rival 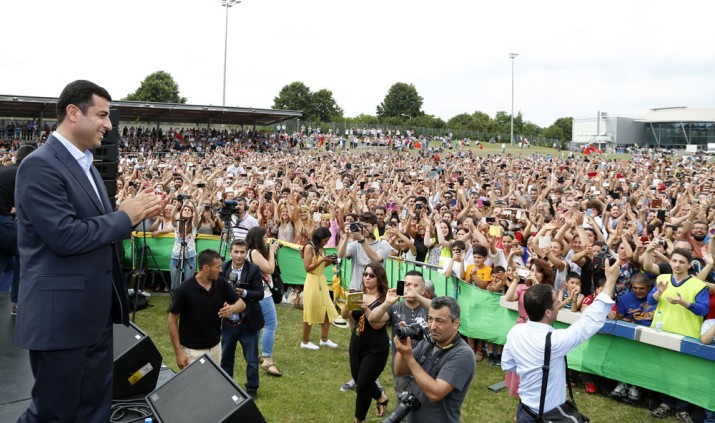 A Turkish presidential candidate stopped in London this weekend as part of a campaign tour across Europe.

Selahattin Demirtaş called on the support of Turkish passport holders who next month will be exercising their right to vote as expatriates for the first time.

Hundreds of people flocked to the grounds surrounding the Lee Valley Athletics Centre in North Enfield to hear the leader of the People’s Democracy Party (HDP) speak.

In comments attacking the leading candidate for the post, Recep Tayyip Erdoğan, Mr Demirtaş said: “The prime minister does not love half of Turkey. We don’t love him.

“He is concerned only with the 50 percent who support him at the ballot box. He has created a society from them, and he loves them because they support him. Watch what he will do when his support drops just a little.”

Referring to the ongoing feud between Mr Erdoğan and the followers of Fethullah Gülen, a US-based Muslim cleric who has been accused by the Turkish government of operating a “parallel state” in Turkey, he said both sides were at fault in a dispute that was ridden with conspiracy theories.

Mr Demirtaş said supporters of Mr Erdoğan’s AK Party should vote for him instead: “The prime minister used to behave as if he already has the freehold for the presidential palace at Çankaya. He saw no rival, because the people were not a rival for him.

“But note now that he has begun to see the strength of the people. He saw a people standing unafraid and resolute against efforts to establish an empire of fear. His chemistry has been broken; hopefully after 10 August he will be physically broken also.

“The prime minister cannot direct an office like the presidency with ease. His temper does not suit it. When there is an opposition like us against him, he cannot use Çankaya like his own possession. He will find us against him in every mistake.

“That is why if AK Party supporters love the prime minister and know his worth, they should support me.”