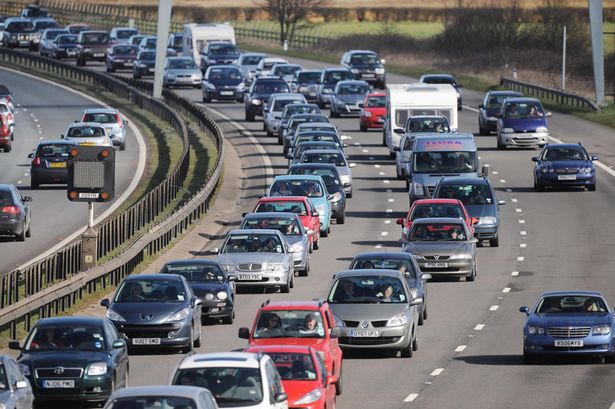 Drivers are being warned of hour-long delays on some roads as traffic builds over the August bank holiday weekend.

Rush-hour motorists in much of the UK awoke to early morning fog, although conditions were expected to improve.

Congestion is expected to build between 11am and 6.30pm as millions take to the roads.

Rail travellers have also been warned to expect delays, with the closure of London King’s Cross and reduced services on parts of the rail network.

London North Eastern Railway (LNER) issued passengers with a “do not travel warning” for the route between London and Scotland, with the line between the capital and Peterborough closed completely for the first time in 20 years on Saturday and Sunday.

It means potential disruption for people heading to events like the Ashes at Headingley, the Leeds Festival and the Ebor Festival in York.

The RAC said the best time to travel on Friday would be after 21:00 BST. Its survey of 1,900 drivers suggested about 16.5 million journeys would be made for holidays and day trips between Friday and Monday.

A survey by tourism agency VisitEngland suggested that 8.6 million Britons were planning an overnight trip in the UK this weekend.

This is up from 7.3 million for the August bank holiday in 2018 and the most since the research began in 2012.

Among the popular events on this weekend are Notting Hill Carnival in west London; Edinburgh Fringe festival; Reading and Leeds Festivals; Manchester Pride and Creamfields, near Warrington in Cheshire.

Where will it be busiest?

All of the worst-affected routes over the bank holiday are in England, according to traffic data company Inrix. There is no bank holiday this weekend in Scotland.

Inrix said drivers should prepare for delays of about 55 minutes on Friday afternoon on the M25 anticlockwise between J4 at Bromley and J1 Swanscombe.

The M6 north between Chester and St Helens is expected to see similar delays.

Inrix said the M6 north between Cheshire and Liverpool would be likely to have 21-minute delays on Saturday afternoon, while the M25 between Gatwick Airport and the M40 could have a 26-minute delay on Sunday afternoon.

On Monday the M6 southbound between Wigan and Stafford could have delays of an hour, with traffic particularly bad at about 14:15.

Delay forecasts are based on previous summer getaways as well as planned road closures and events taking place over the weekend.

Are the trains running?

Network Rail is carrying out 448 engineering projects over the weekend, and King’s Cross station in London will be closed on Saturday and Sunday.

No trains will run in either direction between the station and Peterborough or Cambridge.

A reduced timetable will be used on the West Coast Main Line because of engineering work near Milton Keynes, with two out of four lines closed.

Virgin Trains services will be down to one per hour on most routes, and services between London Euston and Holyhead will run between Crewe and Holyhead only.

On Sunday there will be two trains per hour between London Euston and Manchester Piccadilly via Crewe and Wilmslow.

East Midlands Railway services will be replaced by buses between Nottingham and Lincoln and also between Newark North Gate and Lincoln on Saturday and Sunday.