Man stabbed in the chest in Edmonton 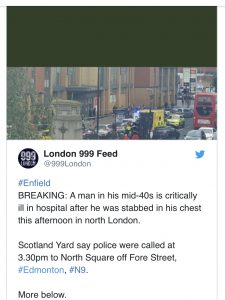 A man was stabbed in the chest in Edmonton amid a spate of violence in the capital.

The victim, in his mid-40s, was knifed in North Square at 3.30pm on Saturday, hours after another man was killed in east London.

He was rushed to hospital where his condition is critical but stable.

A Police spokeswoman said: “Police were called by London Ambulance Service at 15:30hrs on Saturday, 15 June, to reports of an injured man at North Square, N9.

“At the scene a male, aged mid-40s, had suffered a stab wound to the chest.

“He was taken to a north London hospital where his condition is critical but stable.

“Officers from Enfield investigate. At this early stage there have been no arrests.”

Anyone who witnessed this incident of has information is asked to call Enfield Police on 101 quoting CAD5047/15JUN, Tweet @MetCC or call Crimestoppers anonymously on 0800 555 111.