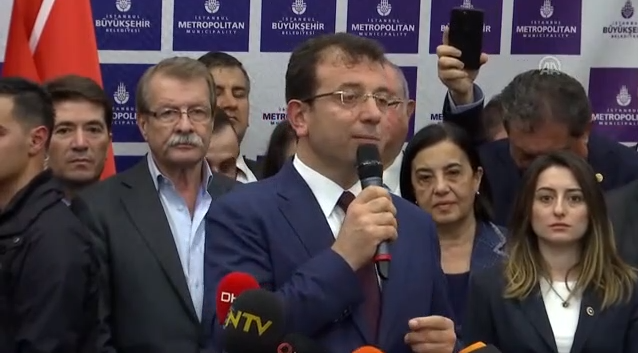 The candidate Ekrem Imamoglu of the Republican People’s Party (CHP) and Turkish government’s main opposition party has been declared Istanbul’s new mayor, despite a pending appeal from the ruling Justice and Development Party (AK Party) to invalidate the vote and hold a rerun.

Nearly three weeks after the election, Imamoglu received the mandate at the Istanbul electoral board headquarters on today (17 April)  after recounting in a number of districts in the city.

Footage showed a large crowd of cheering supporters outside the building in the Caglayan district.

The AK Party had made several appeals for recounting, and on Tuesday it lodged an “extraordinary objection” and asked for a rerun of elections across the city. The country’s top electoral body has yet to consider the request.

In the 16 days since the election, votes have been recounted in dozens of districts, multiple times in some of them.

The delayed announcement of the Istanbul results confirms the AK Party lost mayoral elections in the country’s three largest cities; Istanbul, Ankara and Izmir – in a stunning setback for AK Party.

The Istanbul provincial body of the Supreme Election Board (YSK) invited İmamoğlu to get his credential late afternoon local time after it accomplished the recount of votes in Maltepe district of Istanbul.