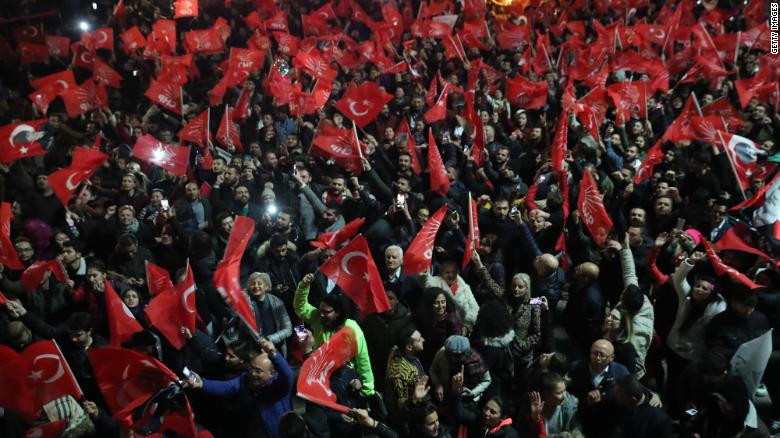 Turkey’s local elections took place on Sunday 31 March, with the ruling party losing key cities like the capital Ankara and Izmir.  It is still unconfirmed which party has won Istanbul.

The media in Turkey and across the world have already claim Turkish President Recep Tayyip Erdogan’s AK Party has suffered a ‘blow’ and is ‘behind its opposition party’ in Istanbul.  Making it very likely the party has lost the three largest cities.

Both Justice and Development (AKP) Party and  Republican People’s Party’s (CHP) claiming their victory over the city in the mayoral race.

A conflicting voting number was given after candidate Binali Yildirim claimed early on Today (1 April) that he had won the race by around 4,000 votes, while candidate Ekrem Imamoglu said he won the mayorship with around 28,000 votes over Yildirim.

Speaking to reporters in the capital Ankara on the results of Sunday’s local elections, High Election Board Chairman Sadi Guven said CHP’s Imamoglu was leading with 4,159,650 votes over AK Party’s Yildirim with 4,131,761.

Guven added: “So far results coming from 31,102 ballot boxes have been defined in our system, count of 84 ballot box results have not been completed because of objections.”

After his announcement today (1 April) Yildrim accepted that he was 25,000 votes behind Imamoglu, but said that his party had objections to the results over invalid votes.

“There are 31,136 ballot boxes [in Istanbul]. If there is one invalid vote in each ballot box, it makes 31,136 votes in total, which is more than the difference [between the two sides],” he said, adding that there are some 315,500 invalid votes in the polls.

When will Istanbul’s winner be confirmed?

Today  Sezgin Tanrikulu, a senior CHP MP from Istanbul, said that his party expected the board to declare victory later in the day.

“We have won the election in Istanbul with around 28,000 votes. For legal reasons, the board is waiting for the objection period to be over to declare our win,” Tanrikulu, who is also a lawyer, told Al Jazeera.

“There have been complaints about certain ballot boxes. Legally, the party objecting should show a valid reason in doing so over each particular ballot box. Therefore, the number of boxes votes will be recounted in is limited,” he also said.

The legal objection period to the board is set to end at 3pm (12:00 GMT) on Tuesday.

If the AK Party officially loses in Istanbul, it means that the three largest provinces of Turkey will have mayors from the main opposition party, according to preliminary results.