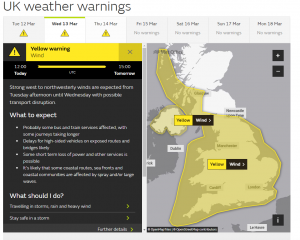 The UK is set to be battered by strong winds from Storm Gareth this week, starting from today the Met Office has warned.

Yellow weather warnings are in place for today covering all of Wales and Scotland and the vast majority of England. The Met Office says there could be gusts of up to 80mph in some parts, leading to the potential for damage.

Travel disruption and power cuts are also possible when the storm, which was named on Monday, hits on Tuesday, forecasters warned.

The Met Office has announced a yellow weather warning for today and Wednesday covering much of England, Wales, Northern Ireland and parts of Scotland.

Another tweet added northern England is particularly at risk of travel disruption and localised flooding. There could be 50mm to 60mm of rainfall over higher ground in Cumbria.