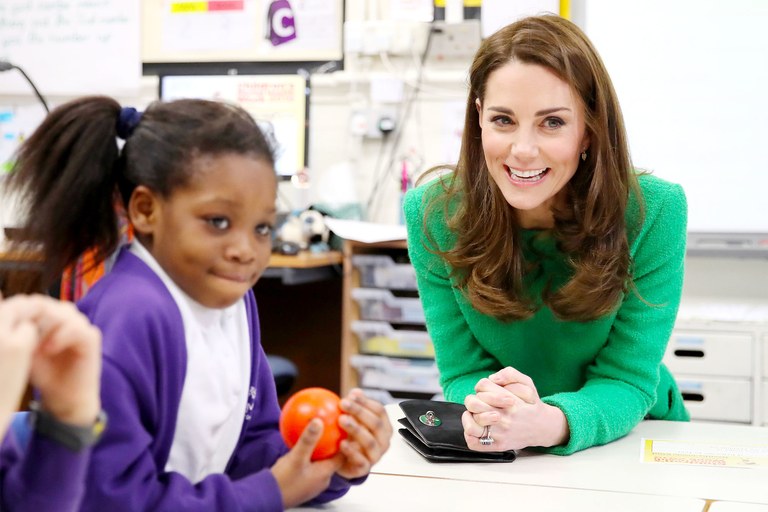 THE Duchess of Cambridge was given a rapturous welcome by a choir of excitable children as she visited a primary school in north London, on 5 February.

Kate, dressed in a green Eponine coat and £295 LK Bennett heels, was serenaded as she arrived at Lavender Primary School in Enfield, the first of two engagements on Tuesday marking Children’s Mental Health Week.

The mother-of-three, who will later meet pupils and parents at Alperton Community School in west London, dazzled in the vibrant green bouclé dress as she arrived in Enfield this morning.

Kate has made mental health in the young one of the cornerstones of her public work, and recently launched a steering group to investigate the correlation between vulnerable young children and those who experience mental health problems, addiction and anti-social issues when they are older.

Kate was greeted by staff as she arrives at Lavender School in Enfield this morning. She has made mental health in the young one of the cornerstones of her public work, and has launched a steering group to investigate mental health in children.

The Duchess of Cambridge is given flowers by a pupil during a visit to Lavender Primary School in Enfield, north London, in support of Place2Be’s Children’s Mental Health Week 2019. She was greeted by singing children as she arrived

The main thrust of the group, comprised of healthcare experts, charities and academics, is to discover whether earlier intervention would make a difference to their future lives.