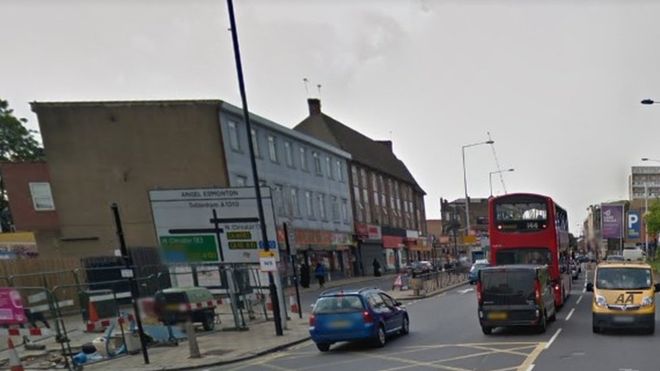 Three men were stabbed as violence broke out in north London.

Police were called to Fore Street, in Edmonton, at about 17:30 GMT to reports a group of youths was in possession of weapons.

On arrival, officers were told three men, aged in their 20s, had attended hospital with stab injuries.

A spokesman for the police said one of the men has been discharged from hospital, but the conditions for the other victims is not known yet.

Police said two cars at the scene, which had crashed into each other, were also found.

A crime scene was put up on Fraser Road while the street was closed off for emergency services to look at.

The violence comes just 24 hours after three men were injured after a suspected drive-by shooting not even a mile away from the scene.

In a statement, police said: “Police are keen to hear from anyone who witnessed this incident but has not yet come forward or anyone who can identify the suspects.

“Anyone who witnessed the shooting or the events surrounding it is asked to call 101, Tweet @MetCC or call Crimestoppers anonymously on 0800 555 111.”