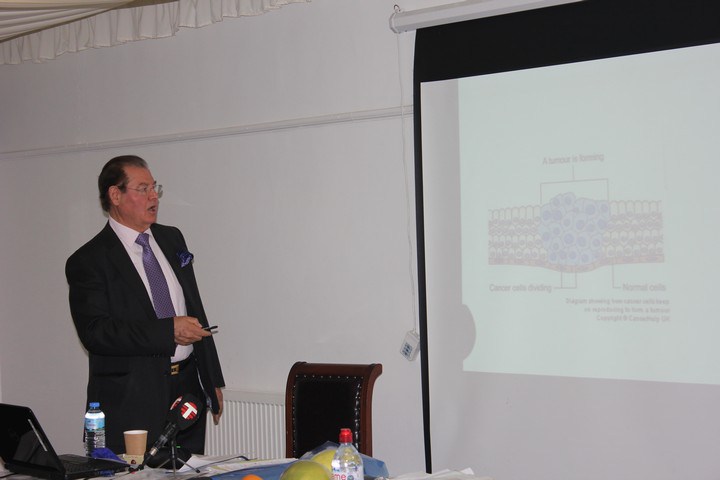 LONDON Angels Cancer Association organised a seminar based on cancer awareness. The seminar was presented by the Honorary President of the association, Dr. Teoman Sırrı.

The seminar was held at the Turkish Cypriot Community Center (TCCA) on Sunday, October 21.

Dr. Teomon Sırrı is well known with the Turkish speaking community also known for receiving his MBE from Queen Elizabeth II in 2006.

Dr.Teoman Sırrı pointed out that cancer cases have increased in the world and in particularly in Cyprus. Sırrı explained the causes of cancer and methods of preventing cancer.

Sırrı underlined the significance of breast cancer which is highly common for women in particular. Sırrı emphasized the genetic threat of cancer. Noting that harmful substances such as cigarettes and alcohol have negative effects on human health. Also noted that alcohol and smoking increases the risk cancer.

London Angels Cancer Association, made the following statement in regards to the seminar:

“Breast cancer is the second most common cause of death among women. The only way to beat cancer is early detection. Therefore, people need to be informed about this deadly cause. A regular check-up is the key for early diagnosis.

In the United States, October was designated as the month of raising awareness about breast cancer in America. Taking advantage of this opportunity, we want to inform our people about this issue and other cancer types. It is vital to raise awareness.”